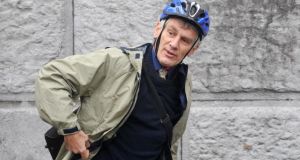 Consultant neurosurgeon Charlie Marks: While agreeing he erred, he is highly critical of the cost of the investigation and the time it took. Photograph: Daragh MacSweeney/Provision

A leading neurosurgeon has launched an unprecedented attack on the procedures used by the Medical Council to discipline doctors.

Charlie Marks, who has 35 years of surgical experience, has been sanctioned by the council after its fitness-to-practise committee found him guilty of poor professional performance last April.

While agreeing he erred, and fully accepting the finding against him, he is highly critical of the cost of the investigation and the time it took.

The preliminary investigation into his case took 2½ years, despite the fact he had pleaded guilty to the main substance of the complaint, he said. During this time, he was subjected to a “legal barrage” of phone calls, letters and emails which “felt like a form of harassment”.

Dr Marks, who retired from Cork University Hospital last year, says the attention “came to weigh heavily upon me” and that he understands why, according to a recent study, so many doctors in the UK have died by suicide while under investigation by the British equivalent of the council.

Writing in today’s Irish Times, Dr Marks argues there is no evidence the fitness-to-practise process improves the quality of patient care, or that there is a decline in standards to justify the vastly increased activity and expense.

“The increased regulation has undoubtedly had a damaging effect on professional motivation and morale.

“I am also pretty sure that the stress of the proceedings will make doctors far more likely to make mistakes or misjudgments in the care of their patients.”

The inquiry was told he failed to inform the patient of possible risks and side effects, failed to ensure she was kept in hospital overnight for observation and failed in advising about post-operative care.

Dr Marks told the inquiry: “I don’t believe I should defend the indefensible” and said he failed to warn the patient adequately. “I clearly made a succession of errors and mistakes.”

Since the hearing, Dr Marks, who lectures part-time in UCC, has been censured, one of the lowest forms of sanction available to the council.