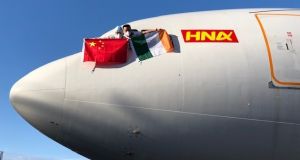 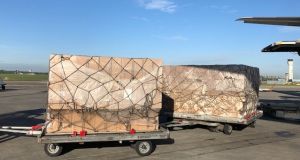 The shipment is the latest in a series of consignments paid for by the Dublin musicians from a €10 million donation, sourced from Chinese suppliers by Cork businessman Liam Casey of PCH International and flown back on a flight organised by Dublin aircraft leasing company Avolon.

The flight, an Airbus A330, arrived in Dublin Airport from Shenzhen in China on Sunday morning with the cargo belly space underneath and passenger cabin containing the personal protective equipment (PPE).

The cargo of 2.1 million “Type IIR” surgical face masks and surgical gowns, said to be a priority for the Health Service Executive (HSE), will be delivered to the health service for distribution.

This was the third and last flight organised by Avolon, funded by donations from the firm and its staff, corporate donors and members of public through a €350,000 crowdfunding campaign.

VIDEO: Some of the two million face masks and 32,000 surgical gowns being unloaded this am at Dublin Airport from third flight of @U2-bought personal protective equipment for health workers; A330 plane chartered by @avolon_aero https://t.co/BSLeHd1BXn via @IrishTimes pic.twitter.com/BVZfvjkZII

U2 and Mr Casey, a 24-year veteran of running manufacturing operations out of China, plan to continue sourcing and purchasing more PPE for Irish healthcare workers and shipping the equipment on more flights in the weeks ahead.

The supply of PPE continues to be a critical for frontline healthcare workers and others in fight against coronavirus as countries rush to maintain adequate supplies.

More than 6.6 million items of PPE were delivered across the health service last week.

Paul Reid, chief executive of the HSE, said last month that the supply of PPE continued to be challenging and that supplies were like “gold dust” with “elements of kind of modern-day piracy going on” as other parties attempt to out-bid an order secured for the Irish health service.

The HSE had accelerated deliveries of its own PPE from Chinese suppliers and that it had consolidated more deliveries into a second batch, increasing the size of its order to cover equipment worth €130 million. The HSE is spending more than €200 million in all on PPE.

Among the donors to Avolon’s fundraising campaign were Aircraft Leasing Ireland, the representative body for the industry, the Irish division of Standard Chartered Bank who gave to $50,000 (€45,709)*, and an Irish businessman, who did not wish to be identified, who donated €50,000.

Domhnál Slattery, chief executive of Avolon, said the company was “shocked at the speed and depth of the giving,” from big corporate donations to small sums from individuals.