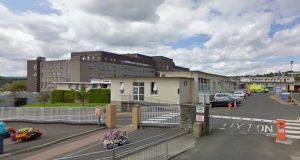 Tests are being carried out for the Ebola virus and isolation procedures have been put in place after a death in Co Donegal. The person was found dead late last night and taken to Letterkenny General Hospital (pictured), it is understood. Photograph: Google Street View

Tests are being carried out for the Ebola virus and isolation procedures have been put in place after the death of a man in his early 40s in Co Donegal.

It is understood that Dessie Quinn, from Doorin, outside Mountcharles, had been working in Sierra Leone and that a number of colleagues had contracted the virus there.

It is understood he had been living with his partner in Dublin but was visiting his family in Co Donegal when he was taken ill.

Fr Adrian Gavigan, of Mountcharles, said he had visited Mr Quinn, noting the dead man’s family presumed he had died as a result of malaria.

Mr Quinn was found dead on Wednesday night and taken to Letterkenny General Hospital, it is understood.

While the cause of death is unknown the HSE is carrying out tests to see whether it was due to exposure to Ebola.

The HSE said it was currently assessing a suspected case of Ebola virus disease (EVD) in Donegal.

“The public health department was made aware earlier today of the remains of an individual, discovered early this morning, who had recently travelled to the one of the areas in Africa affected by the current Ebola virus disease outbreak,” it said.

“The appropriate national guidelines, in line with international best practice, are being followed by the public health team dealing with the situation. This means that the body of the deceased has been isolated to minimise the potential spread of any possible virus.”

The statement said blood samples had been sent for laboratory testing to confirm whether or not this individual had contracted Ebola virus disease.

“Until a diagnosis is confirmed, and as a precautionary measure, the individual’s remains will stay in the mortuary pending the laboratory results”. The results are due today.

The HSE said the risk of transmission of any disease was considered to be “extremely low”.

But as a precautionary measure, appropriate infection control procedures are being put in place in the community and at the mortuary pending the outcome of laboratory tests.

Dr Darina O’Flanagan, head of the HSE Health Protection Surveillance Centre, said: “In general, the risk of contracting Ebola virus disease is extremely low and would involve very close personal contact with the infected individual or their body fluids for there to be any risk at all.”

“We await the outcome of the laboratory tests before we will know whether or not this individual had contracted Ebola virus disease. The appropriate public health guidelines are being followed at every stage in this process as a precaution.”

The World Health Organization said yesterday that 2,473 people have been infected and 1,350 have died since the Ebola outbreak was identified in remote southeastern Guinea in March. Guinea, Sierra Leone, Liberia and Nigeria are the countries affected by the outbreak.

Ebola was recorded in Spain last week when a Spanish priest evacuated from Liberia died of the illness.

The disease has no proven cure and there is no vaccine. The rigorous use of quarantine is needed to prevent its spread, as well as high standards of hygiene for anyone who might come into contact with it.

The South African government said yesterday that due to fears over the spread of the Ebola virus it was banning travellers from Guinea, Liberia and Sierra Leone from entering the country, apart from its own citizens.

Travellers from Nigeria, where there is a much smaller outbreak, will be allowed entry.

South African citizens returning from the three highest risk countries will be permitted entry but will be subject to a stricter screening process, a government statement said.