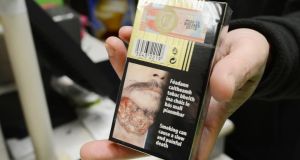 A huge benefit of next year’s introduction of plain cigarette packaging, according to Minister for Health James Reilly, is the opportunity to increase the effectiveness of health warnings on these debranded products. Now, EU health commissioner Tonio Borg also wants to mandate gruesome, super-sized warnings on cigarette packets. Though fear is both policymakers’ weapon of choice for stopping people from smoking, it simply won’t work.

The empirically anaemic theory behind cigarette health warnings is twofold.

First, there allegedly exists a significant “information deficit” among consumers, especially the young and potential smokers. Apparently, the streets of Dublin, Brussels and other European cities are teeming with people who are completely unaware smoking is bad for their health. If I encountered such rare, exotic creatures, I would be tempted to put them under glass and charge people to view them.

Second, it is asserted that scary warnings will educate this ignorant multitude that smoking is, in fact, dangerous. Consequently, many will quit smoking, while others will never take up the filthy habit in the first place.

Futile graphic detail
But do graphic health warnings actually work? The answer is no, they do not.

Today, more than one billion people in 19 countries are covered by laws requiring large scary images on cigarette packs. Several independent research studies published over the past two years have found graphic health warnings to be an utter failure.

A US Food and Drug Administration study concluded that warnings have no influence on quitting or smoking initiation, which confirmed earlier research by the Canadian government that found warnings neither reduce youth smoking nor youth initiation, nor do they reduce adult smoking levels.

Recent Australian research found that warnings do not lead to any significant, positive behavioural changes. And a research team of German doctors found that images of corpses and cancerous lungs on cigarette packs do little to deter nicotine addicts.

There are several reasons for these miserable results. First, warnings do not increase smokers’ information regarding the risks of smoking. The plain truth is that the information in these warnings is neither new nor useful to smokers or potential smokers. That is because, as Harvard University researchers have documented, smokers actually overestimate the risks of smoking to their health.

Dire consequences denied
Furthermore, most people respond to health warnings in a manner that psychologists refer to as “cognitive readjustment”. We recognise the dangers but we exempt ourselves from the potentially dire consequences, as we simply do not believe such bad things will happen to us.

Today, most people suffer from “warning fatigue”: we have been bombarded for so long with so many warnings about so many things that we simply tune most of them out, including “new” warnings about tobacco.

Low self-esteem sufferers (who are mostly low-income people, too) also have a strong tendency to ignore danger warnings explicitly designed to influence their lifestyle choices. Surprisingly, researchers find those potential smokers who possess less information about smoking’s risks are not more likely to start smoking than those who are better informed about the potential health dangers.

Finally, these warnings are usually counterproductive. They fail, in part, because they encourage rebellious acts. Teenagers in particular are attracted to risky behaviour explicitly proscribed by adults in positions of authority. British researchers have found that anti-smoking public health campaigns can be counterproductive by encouraging the very behaviour they warn against.

Blunt weapon
Graphic warnings seek to emotionally shove consumers towards the “correct” choice. In championing this policy, Reilly and Borg place far too much faith in the power of fear. In truth, Irish and continental consumers are capable of, and responsible for, shaping their own lives. They do not need the intrusion of well-intentioned, yet deeply misinformed, public health regulators.

Patrick Basham co-authored The Plain Truth: Does Packaging Influence Smoking? He directs the Democracy Institute (democracyinstitute.org) and is a Cato Institute (cato.org) adjunct scholar. Both institutes have been recipients of funding from the tobacco industry