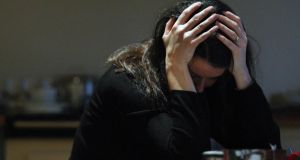 Northern Ireland Statistic and Research Agency (NISRA) figures show that a total of 3,288 suicides were registered in Northern Ireland from the beginning of 1998 to the end of 2012 - 77% were men. The 2012 figures are provisional. Photograph: David Cheskin/PA Wire

Almost as many people have died from suicide in Northern Ireland since the signing of the Good Friday agreement as were killed during the entire Troubles.

The Detail, an investigative news website based in Belfast, has examined 15 years of suicide data as part of its Legacy series which examines issues linked to the Northern Ireland conflict. The Legacy reports were carried out with the support of the North’s Community Relations Council and the series is being published in partnership with The Irish Times .

It has been estimated that around 3,600 people were killed in Northern Ireland’s bloody conflict between 1969 and 1997.

Northern Ireland Statistic and Research Agency (NISRA) figures show that a total of 3,288 suicides were registered in Northern Ireland from the beginning of 1998 to the end of 2012 - 77% were men. The 2012 figures are provisional.

The highest number of deaths registered between 1998 and 2012 was in Belfast where 718 people took their own lives over the 15 year period. The lowest number was in Moyle District Council area where 31 people died from suicide.

The highest suicide rate over the last three years was in the most deprived council area (Belfast) and the lowest was in the least deprived area (Magherafelt).

The average annual suicide rate per 100,000 of the population based on the last three years’ data (2010-12) was 24 deaths in Belfast compared to seven in Magherafelt.

All suspected suicides are referred to the coroner and take time to be investigated. This means that there can be a substantial period of time between a death occurring and it being registered.

For example, of the 313 suicides registered in 2010, only 141 actually occurred in 2010 with the remainder taking place in earlier years.

The impact of the Troubles

Research by Professor Mike Tomlinson at Queen’s University Belfast published in 2012 concluded that the conflict in Northern Ireland had a profound effect on suicide rates. He said that the steep increase in recent years may be accounted for by those who grew up in the 1970s during the worst years of the violence.

He examined 40 years of death registration data and found that the highest suicide rate was for men aged 35-44.

New research carried out by a team at the University of Ulster confirms that people in Northern Ireland who experienced a conflict-related traumatic event are even more likely than those who experienced other types of trauma to have suicidal thoughts and plans.

The research team from the Bamford Centre for Mental Health and Well-Being at the University of Ulster has examined the link between conflict-related events and suicide attempts in Northern Ireland.

Their analysis of data from over 4,000 people - collected in 2008 for a World Mental Health Survey initiative - backs the suggestion that traumatic events associated with the Northern Ireland conflict are associated with suicidal thoughts and plans.

The results are due to be officially published later this year.

Professor Siobhan O’Neill, who is leading the research, said: “Suicidal ideation (thoughts) and behaviour are important public health issues, not least because they give us an insight into the factors associated with death by suicide.

“There are many causes of suicide and it is a complex issue. Mental disorders are an important risk factor with the majority of those who die by suicide having a mental disorder.

“It is therefore important that the associations between suicide and other factors, such as trauma, are examined.”

The World Mental Health Survey Initiative found high rates of mental disorders in Northern Ireland with the rates of Post Traumatic Stress Disorder in the north the highest of all the countries involved in the initiative.

The Department of Health’s view

A spokeswoman for the Department of Health in the north said that reduction in the suicide rate continues to be a major priority for the department.

She said: “Over £7 million is allocated annually to suicide prevention in Northern Ireland. This is more per head of population than any other UK country.

“Suicide is a very complex societal issue and the reasons for the relatively high rate of suicide in Northern Ireland are not known.

“However, it is clear that poverty, recession, deprivation, the legacy of the conflict, exposure to violence, and higher levels of mental health needs are all influencing factors.”

The Legacy project on the impact of the Troubles can be explored further on the Belfast-based investigative journalism website www.thedetail.tv