Study shows prolonged sitting as bad as smoking for health 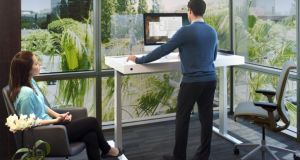 Sitting for long periods of time is just as dangerous for your health as smoking, according to researchers at Queen’s University Belfast.

Sitting for long periods of time is just as dangerous for your health as smoking, according to researchers at Queen’s University Belfast.

Researchers from the university found prolonged sitting was linked to an increased risk of heart disease, obesity, diabetes and an early death.

They said it was as big a threat to public health as smoking.

Dr Mark Tully, from the UKCRC Centre of Excellence for Public Health at Queen’s, said most people sit for an “inordinate” amount of time at work, driving or at home watching television.

“One of the biggest threats to health is the amount of time spent sitting. On average people spend over nine hours, or up to 80 per cent of their waking day, sitting down,” he said.

“Public health scientists have recognised the need to develop effective interventions to address the high levels of inactivity across ages, with sitting regarded as ‘the new smoking’,” he said.

The four-year-study, which is being carried out in conjunction with researchers in Scotland, Germany, France, Denmark and Spain, is looking at developing new ways to help older adults be more active and will test the new methods on 1,300 people in Europe.