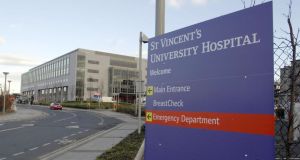 In a letter to the HSE director general Tony O’Brien today the hospital group said Mr Jermyn was receiving a public salary of €136,282 in addition to a privately –funded payment of €136,951 as well as a privately-sourced car allowance of €19,796.

In its letter, the hospital group also said that its director of finance/company secretary was receiving total remuneration of €140,876.

It said the director of nursing was receiving total remuneration of €96,405, which was composed of a public salary of €81,552 and a privately –sourced payment of €14,853.

The letter said St Vincent’s Hospital group was in a position to fund these levels of remuneration as it had a source of private income from the operation of the nearby St Vincent’s Private Hospital.

This institution forms part of the overall group along with the public St Vincent’s University Hospital and St Michael’s Hospital in Dun Laoghaire.

The letter said that the remuneration was fully tax compliant and that the non-exchequer income was not pensionable. It said that no charitable donations were involved in making up the additional remuneration.

The HSE said last night that its director general had sought a meeting with the chairman of St Vincent’s Hospital Group on January 6 “with a view to discussing how the hospital can move towards compliance (with public pay policy)”.