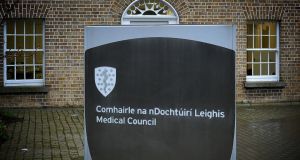 The Medical Council was criticised by some candidates for extending voting by 10 days on the day the polls were due to close. Photograph: David Sleator

Six new members have been elected to the Medical Council, the organisation has announced. The doctors were voted in by fellow medics from a field of 26 candidates.

Dr Hanley competed in the field for medical practitioners who did not fall into any of the other categories. Some 13 doctors put their names forward in this category and Dr Hanley received almost half the total poll.

The current term of office of the council is due to expire on May 31st. The six will replace outgoing members who were voted on to the council in 2008: Dr Gerard Bury, Dr Pauline Kane, Dr John Monaghan, Prof Anthony Cunningham, Dr Anna Clarke and Dr Eamon Bhreatnach.

The election had not been without controversy. The Medical Council was criticised by some candidates for extending voting by 10 days on the day the polls were due to close.

Voting was due to end at noon on March 15th but an extension was made until 5pm on March 26th. Returning officer Patrick Woods had said there had been “strong interest from the profession” in the elections and the longer voting period would “provide an enhanced opportunity for doctors to exercise their democratic right to vote”.

The Medical Council regulates doctors in Ireland. Members sit on its various committees including fitness-to-practise committees that inquire into complaints against doctors.

In a statement last night, the organisation said the six candidates had been elected subject to appointment by Minister for Health James Reilly.

In total, 25 people serve as members of the council. The Minister nominates five people from non-medical backgrounds and has invited expressions of interest for the appointments.The Health Service Executive nominates two members; two members come from the medical schools; and one each comes from 10 other medical bodies.

Speaking last night, Dr Hanley said he regarded his election as a clear vote of no confidence in the current system of regulation and the manner in which doctors have been treated before fitness-to-practise inquiries. He said he would put himself forward for the role of president of the council.