Sat-nav technology for ambulances would result in ’unsafe’ service - Minister

HSE criticised over emergency vehicles ending up at wrong addresses 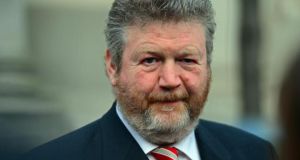 Minister for Health James Reilly said he had asked the HSE to establish a review group to see how people with long-term illnesses or conditions – and who are not covered by medical cards – could access supports. Photograph: Eric Luke/The Irish Times

Ambulances are not supplied with sat-nav equipment because it would be unsafe to do so, Minister for Health James Reilly said yesterday.

The Health Service Executive has faced criticism over recent months for poor response times and numerous cases of emergency vehicles ending up at the wrong address.

At the Joint Oireachtas Committee on Health yesterday, Sinn Féin TD Caoimhghín Ó Caoláin questioned why ambulances did not have access to this form of technology, which would cost “a pittance”.

“Lives are involved. Tragic outcomes need to be avoided. I know instances of ambulances going around and around not knowing what address to go to,” Mr Ó Caoláin said.

Command centres
Mr Reilly, however, said command centres used their own mapping technology which then provided directions to ambulances.

He said the system was safer and more comprehensive than standard sat-nav systems, which often did not cover townlands and other areas. Mr Reilly said cost was not an issue.

“We all have to accept that as much as we strive for perfection, it eludes us and sometimes the wrong information is transmitted and vehicles go to the wrong place,” the Minister said.

However, he said he was sufficiently concerned at a number of recent incidents that he asked the Health Information and Quality Authority to fast-track a planned review of the service.

Tony O’Brien, the HSE’s chief executive, acknowledged that a review of recent incidents confirmed that at some emergency departments, vehicles had been delayed for longer than the 20-minute target time.

Response times
However, he said the executive was continually working to improve response times and had increased investment in the services over the past two years.

This funding had helped to secure 25 new “intermediate care vehicles” and a new single national control centre which will cater for an increased volume of emergency calls.

Mr Reilly said he had asked the HSE to establish a review group to see how people with long-term illnesses or conditions – and who are not covered by medical cards – could access supports.

This move was focused in particular at children with conditions such as Down syndrome, cystic fibrosis and other conditions.

He also confirmed that plans to introduce free GP care for children aged under five are progressing and he hoped they would be in place midway through the year.

“Work will continue on the development of options for the provision of a GP service without fees to the entire population by early 2016,” he said.

“Those who query the wisdom of providing free GP care, while there are wider difficulties with the medical care system, are failing to see the overarching importance of the move.”