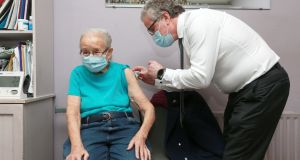 The 86-year-old was among 220 people in the over-85 age group, the third priority group in the State’s vaccination queue, to receive their first jabs over the past three days at Goatstown Medical Centre in south Dublin.

Afterwards she described the injection as “totally painless”.

She expressed excitement at soon being able to see friends she has not seen “for ages and ages” and is also hoping to travel to her son in Spiddal, Co Galway, at some point.

“The idea of getting freedom from all the difficulties we have been under and the keeping away from everybody is great. I can’t see that there is anything to be nervous about,” she said.

Ms Justice McGuinness, who retired in 2006 after 12 years as a judge, including six on the State’s highest court, said she believed strongly that it was wrong for anyone to resist vaccination.

“We really need everybody to have the vaccine in order to make life normal again for the population as a whole. I cannot understand the idea that it involves destroying your freedom to be vaccinated,” she said.

“How did we manage to get rid of smallpox and virtually get rid of polio from the whole world but by doing this? Resisting vaccination seems to be a part of a selfishness.”

Dr Rodney Regan, who administered the jab at the GP clinic, said he found “not elation but extreme happiness” among the over-85s he had vaccinated over the three days because they knew they had to wait four weeks for their second dose – and a week after that – to receive the vaccine’s full protection.

“They are all very tempered because they realise that it will not work for five weeks. They all feel like they are on the road to much more freedom,” he said. “Generally speaking, they are disappointed to have to wait a whole five weeks before they can party.”

Ms McGuinness appreciated the restrictions applying until after the second dose, but added: “You can do a certain amount of partying anyway. The fact is that you have got on the train.”

Ms McGuinness recalled being vaccinated against smallpox while a student in Trinity College Dublin in the 1950s after there was a travel-related case within the student body at the university.

“It was a kind of a scratch on the skin. I created a fuss at the time because I did not want a scar on my arm, so I asked for it on my leg,” she said. “I still have the little scar.”

As of Tuesday, 238,841 first doses of the vaccine had been administered, including to 21,540 people over 85, according to the State’s Covid-19 vaccination statistics.

Philomena Lee among five given leave to challenge mother and baby homes report 18:18
Coronavirus: 394 new cases and no further deaths reported in the State 17:52
Louth man’s conviction for IRA membership ‘a miscarriage of justice’ 17:39
Bicycle-drawn hearse brings cycling advocate on his last journey 17:31
Covid-19 Vaccine Tracker: What's available in the Republic of Ireland and what else is coming? 16:53