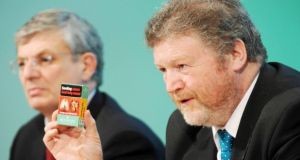 An EU ban on menthol- and vanilla-flavoured cigarettes was vital to “denormalise” smoking for younger people, Minister for Health James Reilly has said.

Stylishly packaged cigarettes were a particular problem, he said yesterday following a two-day meeting of EU health ministers in Dublin. “That’s what they are trying to attract our children to, particularly young girls,” he said.

He said 700,000 European were dying each year and the tobacco industry was looking for people to replace them. “They are focusing on children,” he said.

Ireland had prioritised a plan for a ban even if this hurt jobs in the tobacco industry in some countries. “We have to remember it should never be a case of jobs or lives,” he said.

He said the EU should help countries to “get out of tobacco production” and to develop other types of industry instead.

European health commissioner Tonio Borg also acknowledged there would be opposition to the proposed ban.

“It is natural in those countries where tobacco production is high there will be considerations other than health which will be put forward, to put it mildly,” he said.

It was hoped the effect would be a 2 per cent reduction in the number of smokers over five years in the EU. This would represent 2.4 million fewer smokers, he added.

The ban would affect menthol cigarettes, which are sold in Ireland, and vanilla-flavoured cigarettes.

The Minister said he was hoping to win agreement from other health ministers on the directive during Ireland’s EU presidency. It would then be submitted to the European Parliament for approval. The aim was to have agreement on it by next year and to have it enforced by 2015 or 2016.

Mr Reilly said he supported a proposed law in Ireland banning smoking in cars carrying children under 16, adding it was a “child protection issue”.

The law could be enacted later this year. Since February 1st, all cigarettes sold in Ireland must carry graphic images and health warnings about the dangers of smoking.

Covid-19 guidelines for pregnant women to be updated