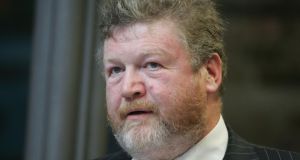 The Minister for Health James Reilly has stopped short of apologising to the husband of Savita Halappanavar, but has not ruled out a future apology.

Speaking to the media after the news broke that a jury in Galway had delivered a verdict of death by medical misadventure at an inquest into the young woman’s death, Minister Reilly said he had to consider the findings of the jury in detail.

“Because the verdict has just been issued and because I must consider it in detail to garner the lessons to be learned from it, it wouldn’t be appropriate for me to take questions on it right now,” said Minster Reilly, who read from a prepared statement.

Responding to one sole question as to whether he felt he should apologise to Praveen Halappanavar for the treatment and deficiencies in care that his wife Savita received in hospital, Minster Reilly said he would like to examine the report.

“I’d certainly have no issue about apologising to any patient’s relative who felt that their relative had not been treated properly and that through any derogation of duty had suffered such catestrophic consequence as Savita Halappanavar,” said Mr Reilly.

Reading from the statement, Minister Reilly said it was “most important to go back to the central reality here..that is that a young woman has died and her baby died with her and that a young man has lost his wife and his daughter.”

“What followed this tragedy has been desperately hard on Mr Praveen Halappanavar, and his family and the family of the late Savita Halapanavar and I don’t want to add to it in any way by making any more general comment at this time,” he said.

“The fact that Dr Ciaran McLoughlin has conducted this inquest with authority and thoroughness must be registered, as must my intention to ensure that everything we learn from this inquest, from the clinical review, and from the HIQA examination of this tragedy, will feed into guidelines, protocols and checklists in maternity and other hospitals to keep patients safe.”

“It’s important also to state that many changes have already been implemented including the putting in place of an early warning score system in maternity hospitals to monitor the well-being of patients,” he said.

“That after all has to be our prime consideration – the safety of all our our patients.”