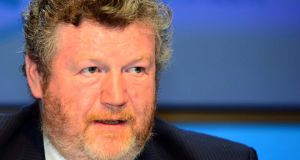 Minister for Health James Reilly is expected to approve the drug pirfenidone for suffers of a rare form of lung disease despite concerns over its cost.

Officials who have examined the case for making the drug available for reimbursement under the medical card schemes are understood to have recommended approval to HSE director designate Tony O’Brien, who will shortly submit this decision to the Minister for approval.

This follows intensive price negotiations with the manufacturer of the drug, InterMune Inc, in recent weeks, following an earlier decision by the National Centre for Pharmacoeconomics (NCPE) not to recommend approval on cost grounds. Pirfenidone is used to treat people with idiopathic pulmonary fibrosis, a rare condition for which no treatment currently exists.

High cost
In March, the NCPE said it could not recommend approval of pirfenidone because of its high cost (€32,700 per patient per year), the significant impact it would have on the health budget and the absence of long-term clinical data on its effectiveness.

NCPE clinical director Dr Michael Barry said last week the negotiations had resulted in a reduction in price and it now appeared the drug would get the go-ahead.

The Irish Lung Fibrosis Association, representing several hundred patients with the condition, had called on the Government to approve funding for pirfenidone, saying it is the first and only drug proven to prolong life expectancy in patients with IPF.

Without access to the drug, patients with IPF may not live long enough to receive a lung transplant, the association said.

The drug also offers a lifeline to IPF patients who are not eligible for a transplant, by interrupting the production of cells and molecules involved in the formation of scar tissue in the lungs and improving progression-free survival, it said.

Number of patients
The number of patients anticipated to receive the drug is 97 in year one, rising to 207 after five years. The cost originally quoted for pirfenidone was up to three times the threshold set by the NCPE for approving reimbursement under the medical card scheme.

The centre acknowledged it has been shown to have a “modest but measurable” effect on slowing decline in lung function in mild to moderate IPF.

Earlier this year, Dr Reilly intervened to grant approval for the cystic fibrosis drug Kalydeco, which had been rejected by the NCPE on cost-effectiveness grounds. Dr Reilly ordered his officials to approve Kalydeco, which will cost €220 million over 10 years.

Fibrosis, the development of scar tissue in the lungs, causes the lungs to become stiff, preventing the effective transfer of oxygen from the blood to the lungs. IPF is more common in men than women, between 60-80 years of age. Patients develop extreme breathlessness, fatigue, coughs and ultimately respiratory failure. This requires those living with IPF to rely on oxygen therapy 24 hours a day.