Consultant obstetrician and gynaecologist will take up post next January 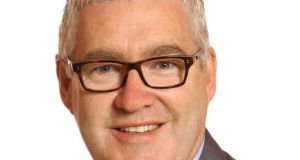 Prof Shane Higgins has a broad range of clinical and management experience gained within Ireland, Scotland and Australia.

Consultant obstetrician and gynaecologist Prof Shane Higgins has been appointed master of the National Maternity Hospital (NMH) in Dublin.

He succeeds Dr Rhona Mahony and will serve for a seven year term as 18th Master since the foundation of the hospital in 1894.

Prof Higgins has a broad range of clinical and management experience gained within Ireland, Scotland and Australia. He has a special interest in high risk obstetrics and maternal fetal medicine, and lectures at University College Dublin.

After graduating from UCC and working in Cork University Hospital, he worked abroad, before returning to Ireland to take up a post at Our Lady of Lourdes Hospital, Drogheda, in 2005.

He acted as spokesman for the hospital after the publication of the Lourdes Hospital Inquiry report in 2006, which investigated a high number of caesarean hysterectomies carried out at the hospital over a 25 year period by the now struck off obstetrician Michael Neary.

In 2012, he established the first stand alone preterm surveillance clinic in Ireland at the NMH. It provides a dedicated service to women who are considered to be at risk of delivering prematurely, including a range of investigations and treatments to minimise risk. To date more than 800 patients have attended the clinic, which has resulted in improved perinatal outcomes.

Prof Higgins said: “I am truly honoured to have been selected for this role and I look forward to working with the magnificent team of professionals that make this hospital such a special place in Irish life.”

Dr Mahony said she would be handing over to someone of huge experience and capability “who will lead this hospital into a new era in its proud history. I wish him the very best.”

Prof Higgins is the “clinical lead” for the NMH move to the St Vincent’s University Hospital campus. He has held this role from the inception of the project five years ago, through the planning process and now into the tender preparation stage.

He advises and consults with other parties on the project board and project team, including the Department of Health, Ireland East Hospital Group, and the HSE. He told a Bord Pleanála planning hearing last year the development would “significantly elevate” maternity care in Ireland.

“Dr Higgins will be taking over at the start of a critical and exciting period which will see the new hospital built and operational at the St Vincent’s campus. We look forward to his term with great anticipation,” said Nicholas Kearns deputy chairman of the hospital board.