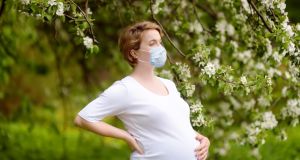 All the evidence would suggest that if a woman had a high risk pregnancy then she should “strongly consider” getting the vaccine. Photograph: iStock.

Pregnant women should ‘strongly consider’ getting the Covid-19 vaccine when it becomes available to them , master of the National Maternity Hospital Professor Shane Higgins has said.

Prof Higgins was responding to an US study published in the American Journal of Obstetrics and Gynecology that found pregnant women with Covid-19 were at higher risk of serious illness, hospitalisation and death than non-pregnany women of similar age.

However, that was not the experience in Ireland Professor Higgins told Newstalk Breakfast. There was a “stark difference” in Ireland, he said . Of the 240 patients referenced in the US study, some 65 per cent of them were either obese or had existing co-morbidities which increase the risk of adverse outcome, he pointed out.

While the international evidence to date was that pregnant patients with Covid-19 were at greater risk of hospitalisation with an increased risk of pre-term birth, that was not the experience among the maternity population in Ireland, he said.

“We’ve delivered nearly 7,000 babies since the start of the pandemic here at the National Maternity Hospital, we’ve had just over 80 positive cases amongst our obstetric population and they’ve all done very well. We have had some patients who required some oxygen support but no other adverse outcomes,” he said.

Any positive cases had been very mild with very few of them symptomatic, he added.

He said their experience was that many Irish pregnant women were effectively cocooning, isolating and taking the virus very seriously.

The availability of vaccines had raised new concerns for expectant parents, acknowledged Prof Higgins, but the evidence was mounting that vaccines were safe for pregnant women in high risk groups.

All the evidence would suggest that if a woman had a high risk pregnancy then she should “strongly consider” getting the vaccine, he said.

“My advice is that when the vaccine becomes available to any pregnant woman, she should consider strongly getting it. It’s a non-live vaccine, and it’s been recommended across the world that high-risk pregnant women should get it.”

Current HSE guidelines for vaccine rollout is that pregnant women who are healthcare workers or who have medical conditions which put them at high risk of severe disease are included in the respective priority groups. The priority for other pregnant women will be determined when more evidence is available, according to HSE guidelines.

Burglar jailed for sexually assaulting woman who awoke with his hand on her throat 16:16
Woman jailed for assaulting a family friend who was trying to break up a fight 16:07
Judge sanctions €7,500 settlement for child over lip injury 15:45
Settlement of €80,000 for girl injured after aunt had partial seizure while driving 15:36
Breakthrough by Cork scientists on colon cancer detection 15:25