More than 2,100 people now on Fair Deal list compared with 654 in February 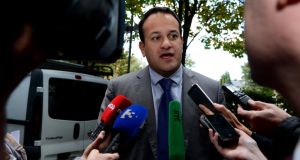 Minister for Health Leo Varadkar told the Oireachtas health committe that the problem with the Fair Deal scheme is that it is budget-capped. Photograph: Cyril Byrne/ The Irish Times.

The number of people waiting to access the Fair Deal scheme has tripled since the start of the year, prompting claims that the system of funding nursing home care for older people is in crisis.

And while over 2,100 older people are now on the waiting list – compared with 654 in February – the time they have to wait for funding under the scheme has increased fourfold, from four weeks to over 15 weeks. The growing delay is causing financial hardship for some families, who have to pay up to €1,000 a week for private nursing care for family members while waiting for payment under the scheme.

Under Fair Deal, also known as the Nursing Home Support Scheme, a person requiring care make a contribution towards the cost and the State pay the balance.

The person can choose between private, public and voluntary nursing homes.

Independent TD Denis Naughten said families were facing bills of up to €13,000 to cover the cost of private nursing home care because of delays in the scheme.

He said he was also aware of families who had their elderly relatives readmitted to hospital after they were unable to pay for nursing home care while the person was on the waiting list.

“It’s a complete and utter mess. It doesn’t make any sense to keep a person in an acute hospital bed costing €850 a night when they could be in a nursing home costing that amount per week.”

Minister for Health Leo Varadkar last week acknowledged there were delays in the scheme and hinted that the budget might have been used up for this year.

“The real problem with the Fair Deal scheme is that it is budget-capped, which is in the legislation,” he told the Oireachtas health committee. “The entitlement ... is budget-capped and when the budget runs out that is part of the big problem.”

With the waiting list growing at the rate of 100 people per fortnight, Nursing Homes Ireland, which represents owners of private nursing homes, says the crisis in elderly care is spiralling out of control.

“Older persons are already waiting months in acute hospitals unnecessarily, arising from failure to adequately resource Fair Deal. We will now be looking at a six-month waiting period and maybe beyond for financial support approval in 2015,” said chief executive Tadhg Daly.