No proof of immunity in recovered coronavirus patients, says WHO

There is no evidence that blood tests to detect Covid-19 antibodies can show whether a person has immunity or is no longer at risk of becoming re-infected, according to the World Health Organisation (WHO). 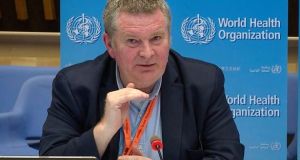 There is no evidence that blood tests to detect Covid-19 antibodies can show whether a person has immunity or is no longer at risk of becoming re-infected, according to the World Health Organisation (WHO).

In a briefing, WHO epidemiologists warned despite hopes governments across the world had placed on antibody tests in an effort to re-open economies, there was no proof yet that having had a coronavirus infection will confer immunity for a significant period of time.

Scientists in many countries including Ireland are developing or testing new pinprick blood tests to measure for raised levels of antibodies generated by the body in fighting the virus – so far none have been validated for use.

Speaking at a press conference in Geneva, Dr Maria van Kerchief said: “There are a lot of countries that are suggesting using rapid diagnostic serological tests to be able to capture what they think will be a measure of immunity. Right now, we have no evidence the use of a serological test can show that an individual has immunity or is protected from reinfection.”

These antibody tests would be able to measure “seroprevalence” levels – but that indication of antibodies in somebody did not mean they were immune.

She said it was “a good thing” so many tests were being developed. “We need to ensure that they are validated so that we know what they say they attempt to measure they are actually measuring.”

Head of WHO’s emergencies programme Dr Mike Ryan said even if antibodies were effective there was little sign that large numbers of people had developed them, and were beginning to offer so-called “herd immunity” to the broader population.

“A lot of preliminary information coming to us right now would suggest quite a low percentage of population have seroconversion (to produce antibodies),” he added.

There was expectation that the majority in society may have developed antibodies, but the general evidence is pointing against that, “so it may not solve the problem of governments”.

In addition, some of the tests have issues with sensitivity, Dr Ryan added. They may give a false negative result.

More than 560,000 of the 2.1 million coronavirus cases across the world are marked as recovered, according to data compiled by Johns Hopkins University in the US. However, infectious disease specialists say the case total is likely to be much higher as people go undetected and countries struggle with testing.

In the US antibody tests have begun to be rolled out in spite of lack of reliability and validation. US president Donald Trump has recommended states use the tests as they start relaxing some of the physical distancing measures imposed to combat the pandemic, which has infected more than 671,000 people in the US.

Dr Ryan said antibody tests also raised ethical questions. “There are serious ethical issues around the use of such an approach and we need to address it very carefully, we also need to look at the length of protection that antibodies might give,” he said.

“You might have someone who believes they are seropositive (have been infected) and protected in a situation where they may be exposed and in fact they are susceptible to the disease.”

As a consequence, Dr Ryan said the tests had to be used as part of a coherent public health policy.