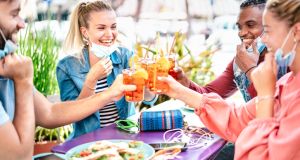 For gastropubs that are allowed to reopen from this Friday onwards, there can be no sponsored work or business-related parties or social gatherings, this includes office parties. Photograph: iStock

Restaurants and gastropubs will not be allowed to take bookings for office parties or other business-related gatherings when they reopen, according to new rules presented to Government Ministers.

Multiple table bookings will also be banned while meals must come to a minimum of €9, according to the Department of Health memo which was approved by the Cabinet last week.

For gastropubs that are allowed to reopen for indoor dining from this Friday onwards, there can be no sponsored work or business-related parties or social gatherings, this includes office parties.

People will be asked not to make multiple bookings and there will also be a ban on live music or loud music in gastropubs or restaurants.

The Cabinet agreed last Friday to begin reopening the country from this week with much of the hospitality sector due to reopen later this week.

In its published guidance, the Government is asking people to sanitise their hands on entry and exit from restaurants and pubs, to wear a face mask indoors and when moving around the building and to provide details for contract tracing.

The move to reopen pubs that serve food and restaurants comes despite a recommendation from the State’s public health team that the hospitality sector should be allowed offer takeaway only services throughout December.

In a letter to the Government, the National Public Health Emergency Team (Nphet) said a choice should be made between relaxing restrictions on households visits or allowing the hospitality sector to reopen.

Chief medical officer Tony Holohan wrote that there is a “growing body of evidence that indoor environments like bars and restaurants are high risk due to the increased likelihood of crowded spaces, prolonged and intense contact with others, poor ventilation, and noise levels, and the higher risk associated with certain activities including dining, drinking, singing or shouting”.

Other guidelines for restaurants and gastropubs include that meals must be prepared on site and inside the premises with a maximum of six people per table. This includes access for non-residents to restaurants in hotels. Social distancing rules apply, with time limits relaxed when gaps of more than two metres between tables can be facilitated.

Restaurants have been closed except for take-away across the State for the past six weeks and closed to indoor dining since October 6th. For Dublin restaurants indoor dining has been banned for more than two months, since September 19th.