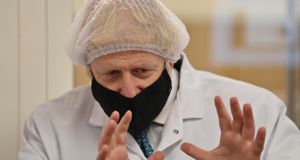 British prime minister Boris Johnson’s government published the impact assessment as part of an effort to limit the scale of a Conservative backbench revolt. Photograph: PA

The impact of coronavirus restrictions on the economy is impossible to measure, the British government said in an impact assessment published hours ahead of a crucial vote in the House of Commons. The document admitted that lockdowns and other restrictions had knock-on implications for physical and mental health and the economy.

“It is not possible to know with any degree of confidence what path the economy would take if restrictions in place were not sufficient to prevent exponential growth or in the absence of restrictions entirely. On the one hand, fewer or no restrictions would allow many people and businesses to operate as normal, if they chose to do so,” it said.

“On the other hand, more widespread infections and the consequences of pressure on the NHS would affect spending in the economy due to voluntary social distancing, effects to confidence and impacts on businesses, including through high levels of employee sickness. Given the unprecedented nature of both the virus and the restrictions that have been required to mitigate it, it is not possible to assess the balance of these effects.”

British prime minister Boris Johnson’s government published the impact assessment as part of an effort to limit the scale of a Conservative backbench revolt when MPs vote on the next stage of restrictions on Tuesday. Under the revised, three-tier approach, almost every part of England will be under the two top tiers of most restrictive measures.

Former chief whip Mark Harper, who chairs the Covid Research Group of Conservative backbenchers, criticised the government for publishing its analysis only hours ahead of Tuesday’s debate on the measures.

“We are, after all, talking about imposing some of the most severe restrictions on our constituents and the way they lead their lives and run their businesses. This information is what ministers should have been insisting on before they made their decisions so it surely could have been made available earlier,” he said.

“As I have said before, I and a number of colleagues are particularly keen to understand the likely impact of the restrictions on Covid and the full extent of some of the non-Covid health implications they have, as well as the undoubted impact on livelihoods.”

What of Wales and Scotland?

Pubs, restaurants and cafes in Wales will be banned from serving alcohol from Friday as the country enters tighter restrictions for at least two weeks. Wales has seen infections rise since it emerged from a brief “firebreak” lockdown on November 9th and first minister Mark Drakeford said that the new restrictions could save between 1,000 and 1,700 lives over the winter.

“The Scottish government hasn’t got everything right – far from it. But I doubt there are many people in Scotland who would have wanted Westminster to be more in charge of our pandemic response. In the depth of crisis, we have looked to and trusted our own government and parliament to steer us through,” she said.