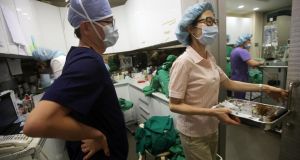 The OECD said the drop in Ireland’s health spending reflected “substantial reforms” undertaken here, by it, including cuts to the prices paid for health care, such as wages and pharmaceuticals.

Almost a third of the 34 OECD countries witnessed a drop in health spending between 2009 and 2011, with Greece and Ireland experiencing the largest fall in per capita annual health expenditure. This is according to a comprehensive overview of health issues across the world published today.

Health spending per capita fell by 6.6 per cent in Ireland between 2009 and 2011, the biggest drop in any country other than Greece, where it dropped by 11.1 per cent, according to the OECD’s Health at a Glance 2013 report.

The OECD said the drop in Ireland’s health spending reflected “substantial reforms” undertaken here, including cuts to the prices paid for healthcare, such as wages and pharmaceuticals.


Generic drugs
However despite this, Ireland ranked badly when it came to the use of generic drugs – only 18 per cent of the volume of pharmaceuticals prescribed in Ireland in 2011 were generics compared to 75 per cent in the UK and 76 per cent in Germany. Only Italy and Luxembourg fared worse across 19 OECD countries.

The OECD report notes that growth in health spending has “slowed markedly” in almost all OECD countries since the start of the downturn in 2008.

Average health spending across 32 of the OECD countries grew by just 0.2 per cent between 2009 and 2011 after a decade where the annual average growth rate in per capita health expenditure stood at over 4 per cent per year.

The report said the cuts in health spending had been reached by targeting hospital spending, cuts to wages and expenditure on prevention and public health while “in several OECD countries, patients are now expected to assume a greater share of health costs”.


Healthcare targeted
An editorial prefacing the report states: “The shift towards restoring sound fiscal conditions has often implied substantial cuts in public spending. Like other government programmes, healthcare has been the target of spending cuts in many OECD countries”.

The report states that “in a climate of fiscal restraint and efficiency efforts, health expenditure growth should be more aligned to a country’s economic growth and its ability to raise revenue,” which was not the case before the economic downturn.

“Governments must continue to seek clever ways by which health systems can continue to improve the well-being of patients within the new fiscal environment.”