National dementia strategy to focus on community care and stigma 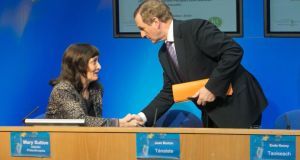 Taoiseach Enda Kenny has unveiled a €27.5 million national dementia strategy that will focus on shattering the stigma of the diesase and supporting community care.

Dementia affects about 50,000 people in Ireland, with Alzheimer’s the most common form. By 2041, the number affected is expected to grow to over 140,000, in line with an ageing population.

The Government, together with the Atlantic Philanthropies foundation, pledged €27.5 million to change how the illness is treated and understood over the next four years, as part of The Irish National Dementia Strategy.

It will focus on caring for people in their communities and attempting to shatter stigma surrounding a disease characterised by both progressive cognitive impairment and deteriorating functional ability.

“Just as they once made memories for us, it’s important that we do everything we can to keep those memories for them in respect of the lives they have built with us and around us. In many cases it’s a long and sad goodbye,” Mr Kenny said of the disease’s effects on family members.

The strategy was a commitment of the Programme for Government and also considers social participation, end-of-life care, training for carers and a “refocusing” of existing healthcare funds.

The policy prioritises a roll out of intensive home support packages and the provision of “additional dementia-specific resources for GPs”, including training materials, guides and contacts for local services.

Elements of the strategy will be implemented between now and 2017, with €12 million coming from Atlantic Philanthropies and €15.5 million from the HSE. The former has already invested €14 million in research over the last three years, with an additional €10 million from the State.

There will also be measures to address public awareness and stigma. “The days of putting a hand over your mouth and speaking about it in hushed tones should be well gone. I think that is the only way to reduce stigma,” said Ms Lynch.

Other actions to be considered when the resources become available include a role for specialist advisers in communities, designated senior clinicians in individual hospitals as well as the development of new residential care models.

The strategy was welcomed by the Alzheimer’s Society of Ireland. Chief executive Gerry Martin said the key aspect was the implementation of policy, in particular primary care training and early intervention.

“It does all start with an increase in awareness and a reduction in stigma. I think if the general population understand that this is something that needs not to be ignored, that in its own way will create a catalyst for increased attendance at GPs,” he said.