Most neurology patients wait over a year for MRI, report claims 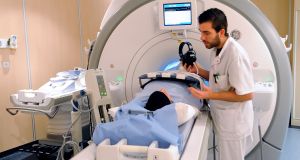 The State’s neurology services suffer from staffing shortages, a lack of dedicated beds and long waiting times, according to a new report.

Waiting times for an MRI scan are over a year in seven of the 11 neurology centres nationally, the report to be published by the Neurological Alliance of Ireland (NAI) on Monday says.

The alliance says a historical failure to invest in neurology services is one of the vital overlooked factors in the ongoing overcrowding problem in hospital emergency departments.

It says an audit of services shows there are “stark deficits” in staffing, with no dedicated multi-disciplinary teams in regional centres and every centre affected by gaps in key disciplines.

In the Mid-West region, staffing ratios are almost three times worse than recommended; 1:200,000 against 1:70,000 recommended by the Association of British Neurologists.

“Lack of dedicated beds is another critical issue, with only six of the 11 centres having dedicated beds and even these are constantly under pressure from other departments,” says Prof Tim Lynch, clinical lead for the national neurology programme in the HSE.

“As a result patients with treatable neurological conditions such as multiple sclerosis often wait for a bed and treatment.”

“These findings tell us that neurology services are struggling, that there is a lottery of care depending on where you live and that we are failing to provide the level and type of care for 800,000 Irish people with neurological conditions that is taken for granted in other European countries,” says Magdalen Rogers of NAI.