Moderate drinking ‘not harmful’ in pregnancy, according to British researchers

Three to seven glasses of alcohol a week does not harm the development of unborn babies, according to study carried out on 7,000 children 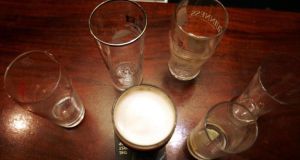 The majority of mothers associated with the study – 70 per cent — followed regular medical advice and had drunk no alcohol during pregnancy. Photograph: Eric Luke

Moderate drinking by pregnant women, defined as three to seven glasses of alcohol a week, does not harm the development of their unborn babies, according to British research carried out on 7,000 children up to age 10.

The children were drawn from a 14,000-strong group born in or around Bristol between 1992 and 1993, who have been examined frequently since birth as part of the Avon Longitudinal Study of Parents and Children.

The majority of their mothers – 70 per cent — followed regular medical advice and had drunk no alcohol during pregnancy. The remaining women drank between one and two glasses a week for some and three to seven for others. A glass is defined as a British pub measure of spirits, half a pint of lager or cider, or a standard wine glass of wine.

The ability was tested of 7,000 10-year-olds to walk on a beam and stand on one leg, with eyes open and closed.

Curiously, the women who had drunk during and after their pregnancies had the best performing children.

Low to moderate alcohol consumption did not seem to interfere with a child’s ability to balance, say researchers. However, income plays a role: better static balance is linked to wealth and education.