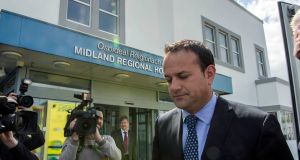 Minister for Health Leo Varadkar was the most frequently lobbied Minister on the alcohol issue. Photograph: Brenda Fitzsimons

Government Ministers and their officials were lobbied on alcohol-related issues more than 40 times in a three-month period, an analysis of the new register of lobbying shows.

Most of the lobbying concerned the Government’s planned legislation to counter alcohol abuse but other topics included the importance of Irish drink exports and the campaign to allow pubs open on Good Friday.

The Minister for Health was the most frequently lobbied Minister on the alcohol issue, followed by Minister for Sport and Tourism Paschal Donohoe. Taoiseach Enda Kenny was also lobbied in face-to-face meetings on several occasions.

Along with drinks companies and their representative bodies, sports organisations such as the Irish Rugby Football Union and its Munster branch were also active in lobbying against any attempt to ban sports sponsorship by the sector.

Alexandre Ricard, chief executive of drinks multinational Pernod Ricard, met the Taoiseach at an event in Paris, where he impressed on Mr Kenny “the importance of supportive domestic policies as underpinning export success,” according to the register.

Irish Distillers, which is owned by Pernod Ricard, invited Tánaiste Joan Burton to speak at the opening of a micro-distillery in Midleton, Co Cork. Informal discussions took place on the “global success” of Jameson whiskey and the economic impact of the indigenous distilling industry.

Industry group Ibec made its views known to a wide variety of Ministers, including the Taoiseach and Ministers Leo Varadkar, Paschal Donohoe, Michael Noonan, Alex White and Simon Coveney.

The IRFU wrote to Mr Varadkar and Mr Donohoe to underline its concerns about the Public Health (Alcohol) Bill and to seek a meeting.

The rugby organisation’s Munster branch appealed in an email to Mr Coveney and Mr Noonan not to change the legislation as it would have “a major adverse impact on our ability to continue as a professional sporting organisation”. A meeting was sought with the Ministers but never took place.