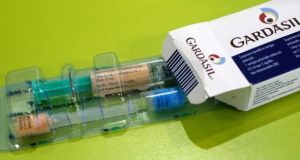 Gardasil is the vaccine used in the vaccination programme for girls in their first year of secondary school. Photograph: Vincent Kessler/Reuters

Minister for Health Simon Harris has told groups he claims are “scaremongering” about the HPV vaccine to “butt out” of providing medical advice .

Mr Harris said anyone who wants to give medical advice on the vaccine, which protects against cervical and other cancers, should first become a medical professional. If they were not prepared to do this, they should “butt out” .

The Minister was speaking at the launch of a scaled-up campaign by the HSE to encourage parents to ensure their daughters get the vaccine. The campaign aims to reverse the massive fall in uptake of the vaccine that has occurred since a number of parents’ groups opposed it.

Social media, for all its virtues, presents new challenges because it allows “misinformation and downright lies” to be spread at high speed to a large audience, Mr Harris warned. For this reason, it was important for parents to get their medical information from trusted sources.

“This campaign has been well-orchestrated and has involved the direct targeting of parents, teenage girls and teachers with disinformation that has no foundation in science or medicine,” he said.

Without significant intervention, the disinformation would cost the lives of Irish women, and those involved would probably move on to target other lifesaving vaccines.

In today’s “post-factual age”, much analysis on social media is based on “hearsay and emotion” rather than hard evidence, he said. Yet over the last 60 years, vaccines have saved more children’s lives than any other intervention by saving more than two million lives a year, he said.

“We want to do all we can to prevent another Wakefield-type scenario,” he said, referring to the controversy that arose in the 1990s when the now discredited Dr Andrew Wakefield made groundless claims of a link between the MMR vaccine and autism.

As part of the HSE campaign, more than 40,000 information packs will be delivered across the country this week in advance of vaccination teams visiting schools in September, when first year girls will get the first of two doses of the vaccine.

The uptake of the vaccine has plummeted, from a high of 87 per cent to just 50 per cent last year, because of the opposition. The parents’ groups claim, with no supporting scientific evidence, their daughters have suffered chronic ill-health after receiving the vaccine.

The vaccine saves lives by preventing the most common strains of HPV that cause cervical cancer. Each year, about 300 women require treatment for cervical cancer and about 90 die from the disease.

Dr Stephanie O’Keeffe, HSE director of health and wellbeing, said it remained concerned about the drop in uptake but added that provisional data from April shows some stabilisation occurring this year.

She said parents and teenagers should visit trusted sources of information online, such as hpv.ie, to learn about the vaccine.

Prof Karina Butler, chair of the National Immunisation Advisory Committee, pointed out that over 230,000 girls in Ireland have safely received the HPV vaccine, along with 227 million people worldwide in other countries.

“Not one of these people anywhere in the world has been medically proven to have had a long term side effect from getting the vaccine,” she said.

“This is a vaccine that can save lives. It works. In Scotland where their vaccination programme has been in place since 2008, they have seen a 90 per cent decrease in HPV infections. In Australia, the vaccine has prevented one in every two new cervical cancers.”

Regret, one of the groups opposing the vaccine, has called for an independent investigation of its claims that more than 400 Irish girls have suffered “chronic cluster symptoms” after taking the vaccine. The group, which describes itself as a “parent-led support group”, is also calling for the product information leaflet for the Gardasil vaccine to be included in HSE information packs distributed in schools.

The HSE says parents are being provided with detailed information in plain English and the patient information leaflet can be accessed on hpv.ie.