Medics on Ireland's coronavirus frontline: ‘We got protective shields from a hardware shop’ 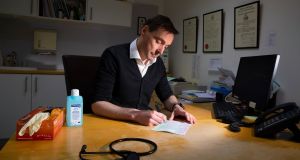 Dr Geoff Plant, who works in a large GP practice in Waterford city. At the beginning of the week, he says, it was business as usual, but by Tuesday evening, everything had changed. Photograph: Patrick Browne

Dr Geoff Plant is coming to the end of his working day at the end of a challenging week.

At the 16-GP practice where he works in Waterford city, the number of patients turning up for appointments has dropped, but he spent one-third of his day on the phone to “worried well” patients, offering advice on respiratory symptoms, hygiene and testing.

“We’re getting a lot of worried phone calls. ‘My best friend met this guy whose colleague was diagnosed with Covid-19 – should I self-isolate?’ That kind of thing,” he says.

There is a lot of confusion, he says, about what “self-isolation” actually means. The guidance on the HSE website, which was updated yesterday, is that self-isolation applies to people who are not feeling well and have come back from a red-zone country – currently China, Hong Kong, Singapore, South Korea, Iran, Japan, and the Lombardy, Veneto, Emilia-Romagna or Piedmont regions of Italy – or were exposed to a laboratory-confirmed case should phone their GP or emergency department and self-isolate.

The guidance of the HSE continued to be that people who are feeling well should carry on with their normal routine, even if they have returned from an affected area.

However, yesterday Minister for Health Simon Harris asked people returning from Spain and Italy to restrict their movements for the next two weeks.

“We have a lot of people at the moment calling with a cough, saying ‘I have a cold; I’m self-isolating.’ I say, ‘Good on you’, but they’re not actually in the isolation category.

“If you have respiratory symptoms and you’re not in the self-isolation category, once you’ve been symptom-free for three days, you no longer need to isolate.” You don’t, he says, currently need to self-isolate for 14 days.

Some of the questions he’s getting go beyond a GP’s remit into the realm of moral and ethical issues. “There are a lot of questions like, ‘Should I have the grandparents minding the kids?’ We can’t give direct medical advice on that. But I would have a fear now the schools are closed that grandparents are going to be asked to mind children. I would be wary of this, particularly if they’re unwell, or have co-existing illnesses. I probably wouldn’t do it myself.”

At the beginning of the week, says Plant, it was business as usual, but by Tuesday evening, everything had changed. “One difficult thing for us at the moment is trying to keep up with those guidelines as they happen. You try to implement one, and then there’s another one in place.”

For example, the guideline for GPs at the start of the week was that anyone who had been in a “red-zone” country should be dealt with over the phone. “On Tuesday night, the guidance changed. Now, anyone with fever, cough or respiratory symptoms should not come into the surgery. They should phone in.”

It’s a 'huge change', he says. 'Implementing it is difficult for all GP practices'

Changing guidance yesterday also meant that people were being asked to contact their GP with respiratory symptoms, even if they have not been in an at-risk area.

It’s a “huge change”, he says. “Implementing it is difficult for all GP practices. Our receptionists have to ask anyone calling in, ‘Are you suffering from respiratory symptoms?’ If they answer yes, a nurse and then possibly a doctor is ringing them back.”

When the doctor or nurse calls to triage and finds that a patient does have respiratory symptoms, but has not travelled to a red-zone area, or had contact with a known case of Covid-19, “we’re often able to advise over the phone. A lot of it is mild cold symptoms.”

If they are suffering respiratory symptoms or a fever, and have travelled to a red-zone area, or been in close proximity – defined as within two metres for 15 minutes – with a known Covid-19 case, or if they have symptoms and have attended a healthcare facility abroad where patients were being treated, the situation escalates. “We ring Public Health and get advice from there.”

Plant points out that GPs have not so far been able to order a test for Covid-19. “A public health doctor is the only one able to order tests”, though he adds that that might change.

Of the patients who have respiratory symptoms but no other red flags, a minority will still need to attend. “That’s a whole new ballgame. We’re going to use a separate section of the building. We will be telling them to park their car outside, and ring us to let us know they’re here. They will then be phoned to say when it’s time to come in. They’ll be asked to cover their mouth on their way in. One GP and possibly a nurse will see them and we’ll be fully gowned, with a plastic gown, gloves, goggles and a face mask.”

In the meantime, they’ve had to think outside the box. “We got protective shields from a hardware shop, like farmers might use.”

The other major challenge throughout this week has been trying to protect frontline staff. “We have signs on the door asking people to keep one metre back from our main reception staff. People aren’t obeying it; they just keep stepping over the line and coughing on the reception staff. So we’re getting a glass partition installed in front of the reception desk and using rope cordoning.”

The one piece of advice Plant gives to everyone is to wash their hands frequently; cough or sneeze into a tissue or their elbow and keep social distancing. “I think GPs are all feeling like we’re about to do our Leaving Cert. We’re worried about what’s coming up. We’re worried about our loved ones, the same as everyone. But we have to keep working regardless.”

1 Travel rules unlikely to include mandatory quarantine or cancelled flights
2 Half of Covid-positive workers in meat plant were asymptomatic, reports show
3 California shuts down again as US coronavirus cases surge
4 Covid-19: 200 to 250 people arriving in Ireland from US daily - Coveney
5 US passengers fly into Dublin: ‘I’m here for six days. I guess I’ll have to stay inside’
Real news has value SUBSCRIBE