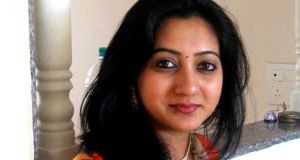 Significant deficiencies in the care of critically ill women in the State’s 19 maternity hospitals have been identified in a report on the death of Savita Halappanavar.

The report by the Health Information and Quality Authority points to 13 “missed opportunities” that, had they been identified and acted upon, could have resulted in a different outcome for Ms Halappanavar, who died in University Hospital Galway last October.

While restating criticisms of the clinical management of Ms Halappanavar made in an earlier Health Service Executive report and at the coroner’s inquest, the Hiqa report casts its net more widely by identifying shortcomings in maternity care generally and calling for a national review of maternity services.

It is also more directly critical of the care provided by staff at UHG, in particular her consultant, Dr Katherine Astbury, who is not identified by name in the report but who gave evidence at the inquest into Ms Halappanavar’s death.

Minister for Health James Reilly last night promised to ensure that the recommendations of all three reports were fully implemented, while the HSE said it was appointing a senior official to oversee this work.

Ms Halappanavar’s husband Praveen regards the report as a vindication of his account of her death, his solicitor Gerard O’Donnell said.

The Hiqa report found there were “questions as to the sustainability of the provision of maternity services in some areas”.

The report reveals that Hiqa wrote to the HSE twice in recent months to express concern about issues which they said could pose serious risks to the health of pregnant women whose clinical situation was deteriorating.

Thirteen of the 19 maternity hospitals have no high-dependency beds for maternity patients and none has critical care beds, Hiqa pointed out to HSE director general Tony O’Brien in July.

The letter raised concerns about limitations in the provision of critical care to obstetric patients through neighbouring acute hospitals, particularly in HSE Dublin North East.

The authority raised further concerns in August with Mr O’Brien, who gave assurances about services in most hospitals. But the report says Hiqa remains concerned that assurances are not in place in all hospitals, though it notes the HSE’s commitment for this to happen imminently.

Phelim Quinn, Hiqa’s director of regulation, said the investigation findings reflected a failure in the provision of the most basic elements of patient care to Ms Halappanavar. Mr Quinn said there were “disturbing resemblances” between Ms Halappanavar’s case and that of Tania McCabe, who died in hospital in Drogheda in 2007 after her membranes ruptured.

It was “simply unacceptable” that, six years on from the report into Ms McCabe’s death, only five of the 19 public maternity hospitals could provide a detailed status report on the implementation of those recommendations.

“I don’t believe any doctor, any midwife, any nurse ever wants to stand by and watch a patient die, but if you don’t have the correct knowledge, the correct support services, the correct guidelines and protocols in place to help and guide clinical care things like this are going to happen,” UK-based anaesthetist Nuala Lucas, a member of the Hiqa investigation team, said.

There was evidence of inadequate staffing in UHG and across the maternity services, she added.

A special board meeting of the West/Northwest Hospitals Group, which includes UHG, will take place next week to consider the findings of the three reports into Ms Halappanavar’s death.

Bill Maher, chief executive of the group, said considerable progress had already been made in implementing recommendations, including an early warning score system, staff education on sepsis and improved communications on doctors’ handovers. Mr Maher apologised to Mr Halappanavar.

Ms Halappanavar was 17 weeks pregnant when she died from sepsis on October 28th last year following a miscarriage.