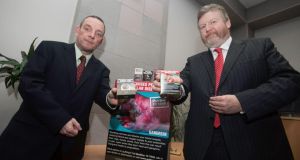 Chairman of the Joint Oireachtas Health Committee Jerry Buttimer (left) and Minister for Health James Reilly during a media breifing at Government Buildings where it was announced that Cabinet had approved the General Scheme for the Public Health (Standardised Packaging of Tobacco) Bill 2013. Photo: Gareth Chaney Collins

Minister for Health James Reilly said he would be “astonished” if legislation proposing cigarettes be sold only in plain packs did not prompt legal action from the tobacco industry.

He was speaking today after the Cabinet unanimously approved the heads of a Bill which will force tobacco companies to sell cigarettes in standardised cartons with graphic health warnings.

The Public Health (Standardised Packaging of Tobacco) Bill 2013 will outlaw all forms of branding on cigarette packs from trademarks and logos to colours and graphics.

The Bill, which will also determine the size and position of the warnings, will now be submitted for hearings by the Joint Oireachtas Committee on Health and Children for review and report.

“Cigarette packs have been described as the last billboard for the tobacco industry; this legislation will force the industry to show with greater clarity, the potential devastating effects of smoking on health,” Dr Reilly said.

“As it stands the tobacco companies use packets of various shapes and colours to attract young people to take up the killer habit. Standardised packaging - all the one type - with much larger warnings will be a deterrent.”

So far Australia is the only country in the world to have adopted such far-reaching legislation.

However, tobacco companies there have already indicated they plan to challenge the legislation under various trade, competition and intellectual property laws.

Dr Reilly said other countries had pulled back from introducing tighter tobacco regulations to await the outcome of the Australian case.

“Anything they can do to delay or intimidate they will do. We are not prepared to be intimidated by the tobacco industry. We’re going to stand up for the rights of our children.”

Asked if he thought the tobacco industry would mount a legal challenge here, Dr Reilly said: “I’d be astonished if they didn’t, if for no other reason than to intimidate other countries from going down the same road.”

Chairman of the Oireachtas Committee on Health Jerry Buttimer said the committee would meet this week and next week to discuss how it intends to handle the hearings.

“This is a public health issue, and we have at last taken a stand to eliminate the scourge of tobacco.”

Under the proposed legislation, it is envisaged the cigarette brand name will be presented in a uniform typeface for all brands, and the packs will all be in one plain neutral colour.

The cartons will also display graphic warnings and text about the dangers of smoking selected from a library of images and warnings developed by the European Commission.