Kenny stresses law on abortion not being altered 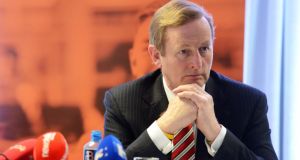 
Taoiseach Enda Kenny stressed the law on abortion was not being altered when the Government held a press conference yesterday to give further detail on the proposed Bill for the Protection of Life During Pregnancy 2013.

He said the aim of the Bill was to protect women and their unborn babies by “clarifying the circumstances” in which medical practitioners could intervene when a woman’s life was at risk.

He said the proposed legislation “will at last bring certainty to pregnant women and legal clarity to medical personnel”.

Arguing that the Bill did not change Ireland’s abortion law or create any new rights, Mr Kenny said the new legislation was strictly within the parameters of the Constitution and the Supreme Court judgment in the X case.

“It will cover existing constitutional rights, it will not create any new rights,” he said. “The law on abortion in Ireland is not being changed. Our country will continue to be one of the safest places in the world for childbirth and the regulation and the clarity that will now become evident through the Protection of Life During Pregnancy Bill will continue in law to assert the restrictions on abortion that have applied in Ireland and that will apply for the future.”


Provided certainty
Minister for Health Dr James Reilly said he believed women’s lives would have been saved if the X case had been legislated for over 20 years ago in the way now proposed. The legislation would have provided certainty where there was uncertainty about the right to a termination, as well as faster action.

Tánaiste Eamon Gilmore said he was “pleased that today, we are finally legislating for the X case”.

Mr Gilmore acknowledged that this was “a sensitive and difficult issue” and one which had “evoked strong emotions across Irish society and within all political parties on both sides of the debate”.

He said the Bill was a “sensible and workable solution that respects the right of children and assures that a woman’s voice will be heard”.

Dr Reilly said the publishing of heads of the Bill was a “real step forward” which would bring “enormous clarity” for pregnant women and medical practitioners. “I believe we have struck the right balance,” he said, adding that the public could be assured that the Bill was in line with the Constitution.

She said in the very rare occasions where such difficulties arise during pregnancy, doctors needed to have “clarity and legal certainty around the decisions they are making”.

The Taoiseach made clear to Fine Gael TDs opposed to the abortion legislation that there will be no free vote on it. Members of the parliamentary party would have to vote in accordance with procedures, which in this case required a whip vote, said Mr Kenny.

He said he hoped all Fine Gael TDs would support the legislation. “I can’t speak for everybody obviously but I hope we can take everybody with us on an issue that I know is sensitive and in respect of which people have a range of views.”

People in his party had signed a formal declaration to sit, act and vote in accordance with Government decisions taken and this concerned everyone as mature adults, he said.