Isn’t it bionic? The making of a robotic arm 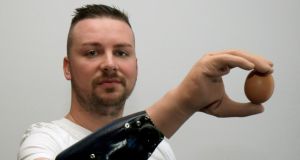 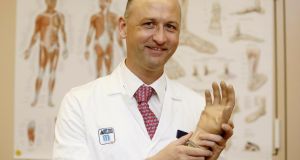 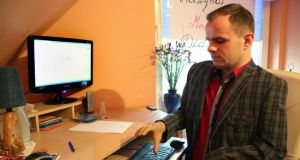 Back in business: Martynas Girulis, one of the other recipients of a bionic hand. Photograph: Petras Malukas/AFP/Getty

Three men who have had “bionic reconstruction” at a Vienna hospital are the first patients to have their hands replaced by prosthetics that they can control with their minds.

The procedure, as outlined in the Lancet medical journal this week, involved amputating each man’s damaged hand and substituting it with a robotic version.

Aidan Roche, an English postdoctoral scientist, was part of the team behind the project. He explains that the men had been involved in high-energy accidents in which their chests stopped moving but their arms kept going forwards. “What’s happened then is the nerves are ripped out of the spinal cord at the lower level, thereby disrupting all communications with the hand.”

Medical teams had been unable to repair the nerve damage, he says, so to begin with the men had wanted amputations when they approached Prof Oskar Aszmann, of the Christian Doppler Laboratory for Restoration of Extremity Function at the Medical University of Vienna, who led the surgery. “For them the limb was an impediment to life that they just wanted to get rid of,” Dr Roche says.

The damaged nerves in the men’s hands were still bringing signals through the shoulder, elbow and, to a lesser extent, forearm. “That electrical signal in the forearm is not enough to control a hand, but it is enough to control a prosthetic hand if you use surface electrodes above where those signals are,” Roche says.

But the team and their patients had a lot of preparatory work to do before the men’s hands could be replaced. As things were, each man had only a single nerve signal reaching his forearm. This would allow one action, such as opening the hand, but not an opposite action, such as closing it.

“To give a patient a second signal,” Roche says, “we transferred nerves – in two of the patients we took a muscle transfer from their own thighs – and then put that on to the opposite side of the forearm, thereby enabling the patient to get a second signal so they could close the prosthetic hand.”

The nerves and muscle were then given three months to grow back. “At the end of three months we put the patients in front of a computer screen. We enter the rehabilitation phase, and try to see if they can control the muscle contractions by looking at signals on the screen.”

All three patients spent nine months or so doing this mental training, to learn how to control the computer-generated “virtual” hand. After they had mastered this they practised using a hybrid hand – a prosthesis attached to a splint-like device fixed to their damaged hand.

After this their hands could be amputated. Once each man’s stump had healed, Roche says, the patients were fitted with the final prosthesis and were able to go home.

Although the prosthesis will always be an assistant hand, instead of a dominant hand, “the patients are now leading their normal lives, like you or I would lead our lives”.

Milorad Marinkovic, one of the three Austrian patients, says that the decision to have the procedure was the best of his life. He was 17 when, in 2001, he was involved in a motorbike accident that damaged the nerves in his right arm, causing it to lose all mobility.

He had reconstruction work, and some movement in his shoulder returned after about four years. He could move his elbow as well but was unable to move his hand.

“We waited two years, and nothing happened,” he says. “Then they started to take some nerves out of my legs and put them in my arm, to see if it would work.” Again, nothing changed.

Marinkovic says that he had severe pain in his arm – and that it sometimes turned dark blue. “So I decided to talk to somebody about what I could do and what I could do in the future.”

Prof Aszmann showed Marinkovic prosthetic arms and told him to go home and discuss amputation with his family. A month later Marinkovic called the professor back.

Four years later, his quality of life has improved greatly. “When you have both hands you don’t think about the daily things that you do, but when I lost my hand it was impossible to open a bottle or just open some chips.

“When I wanted to brush my teeth I was not able to take the brush in one hand and the toothpaste in the other. With this hand I don’t have any problems. It was the best decision I have ever made.”