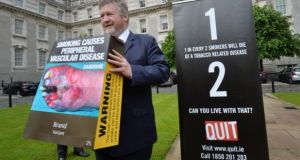 Former minister for health shows images to the media in June after the Cabinet decision to approve the publication of the Public Health (Standardised Packaging of Tobacco) Bill 2014. Photograph: Alan Betson/The Irish Time

Ireland can create a “domino effect” internationally by becoming the first country in Europe to introduce plain packaging of tobacco, according to one of Australia’s leading public health experts.

Prof Mike Daube said the introduction of plain packaging here would have huge international implications, with other countries likely to follow Ireland’s lead.

Australia became the first country in the world to force tobacco companies to remove their logos from packaging in 2012. Similar legislation has been published by the Government here and is currently before the Dail.

“I cannot think of anything that could be done to tackle tobacco more effectively than Ireland introducing this measure,” said Prof Daube of Curtain University in Perth, who chaired the Australian government’s committee that recommended plain packaging. “We showed it could be done, but we are a low-population country on the other side of the world.”

It was important the Government was not bullied out of proceeding by the “zombie arguments” of the tobacco industry, he told a meeting organised by the Irish Cancer Society in Dublin.

Although it was early days to decide whether the Australian initiative has been a success, the early signs were encouraging, he said. Daily smoking rates were down from 15.1 per cent to 12.8 per cent in three years (compared to 21.5 per cent in Ireland).

“This result is the best I have seen in my 40-year career in public health. We are seeing a dramatic decline in smoking - and none of the dire consequences tobacco companies warned about. Their desperate efforts to undermine plain packaging have been completely discredited.”

The tobacco industry contends that the underlying trend in smoking rates was already downward, so the fall since 2010 cannot be attributed to plain packaging.

Prof Daube said the measure was no “silver bullet” but it was one of the most important elements of a comprehensive tobacco control policy. “Crucially, it has an impact on children and young people. It turns cigarette packs from glossy fashion accessories into something you don’t want to be seen with.”

He claimed the industry went “feral” when the measure was first proposed in Australia. It mounted a “ferocious” campaign of opposition, funded a sham retailer organisation to parrot its views and took a High Court challenge, which was unsuccessful.

Nine EU states have objected to the Irish proposal and the tobacco industry has complained plain packaging interferes with its intellectual property rights.

The ICS said yesterday its legal advice was that the measure curtailed, rather than eliminated, these rights, and that these had already been curtailed by previous health measures, such as the requirement for large warning notices on cigarette packs.

Covid-19 vaccines Q&A: Why are targets being missed?