Drinkers have greater harmful effects on others than in Australia, Canada or US 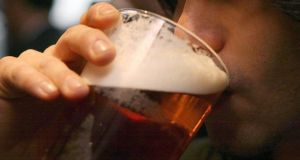 More than one in four Irish people has experienced in the past 12 months at least one negative consequence due to someone else’s drinking, a new report finds. Photograph: Johnny Green/PA Wire

More than one in four Irish people, or 28 per cent of the population, has experienced in the past 12 months at least one negative consequence due to someone else’s drinking. These can be rows with friends or family members, verbal abuse from a drunk person, or finding themselves in a vehicle being driven by someone who is drunk.

The findings, by Dr Ann Hope of TCD, who offered them in a report for the HSE, entitled Alcohol’s Harm to Others in Ireland , are based on an analysis of Irish national drinking surveys for 2006 and 2010, and comparing those findings with similar surveys in Canada, the US and Australia.


Workplace
The conclusions were replicated in the workplace, with the report rating a harm experience in the Irish workforce due to someone else’s drinking being double that of the Australian workplace.

In every category of effect – family problems, being a passenger with a drunk driver, assault, vandalism of property, financial problem, adverse effect at work, having to work extra hours to cover for a colleague, or being involved in an accident or close call at work – people in Ireland were significantly worse off than people in each of the other countries.

Family problems cause by drink affected more than double the number of people in Ireland than in Canada and the US combined – 13.5 per cent as against 5.4 and 3.4 per cent respectively. A person’s ability to do their job was almost twice as adversely affected in Ireland (8.3 per cent) as Australia (4.2 per cent).

In terms of the adverse affect on children – being verbally abused, left in an unsafe situation, witnessing violence against another, or experiencing violence themselves – children in Ireland were worse off in all categories compared to children in Australia.

Launching the report yesterday speakers drew comparisons with the experience of the smoking ban and the need radically to change national attitudes towards drinking. Dr Hope said education alone would not work.


Price and availability
“Education to change drinking behaviour doesn’t work,” she said. “There are hundreds and hundreds of studies to show that, of itself, it doesn’t actually bring about behavioural change. . . We know that price, availability and marketing are the key drivers of our drinking environment and how we drink. An example of that in 2006, below-cost selling came in and within a short period of time and since that time we have had extremely cheap alcohol.

“So that actually had shaped, it had changed, our drinking. We see more home drinking because people are now buying in an off-licence and drinking it at home.”

Noting that “harm was more extensive in Ireland in comparison to the other countries”, she said further research was needed to gain an even better understanding of how Ireland’s alcohol problem adversely affects people who are not drinking. Alcohol abuse was known to cost some €3.5 billion a year but if the adverse affect on others was factored in, it was possible that that cost could double. I’m suggesting that is the case but I think it is worth thinking that this is a bigger problem that we first recognised,” she said.

Launching he report, Minister of State for Health Alex White said the Government was committed to addressing alcohol abuse as a public health issue. The government’s aim was to get average consumption of pure alcohol per person down from 12 litres a year to the OECD average of 9.2 litres within six years.


The report may be downloaded from: hse.ie/alcoholresources