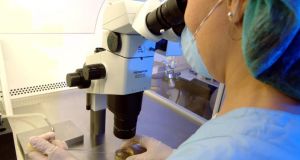 At least one Irish clinic says it will have the capacity to offer a controversial new procedure that allows doctors create IVF babies using genetic material from three people.

The development – known as mitochondrial transfer – uses a small amount of DNA from a female donor to prevent mothers passing on genetic disorders such as muscular dystrophy and heart conditions.

Mitochondrial diseases are incurable and, up to now, there has been no way to prevent them being inherited. About one in 6,500 people is born with a mitochondrial disorder.

Scientists have hailed the procedure as a breakthrough and as a new way of bringing hope to families affected by life-threatening genetic disease.

Ethical concerns
However, opponents say the procedure is unethical and could set doctors on a “slippery slope” towards designer babies.

The British government is planning to push ahead with plans to make mitochondrial transfer available. Draft regulations are due to be published later this year, and the procedure could be offered within two years.

There are no laws in Ireland to govern assisted human reproduction. However, IVF clinics would need authorisation from the Irish Medicines Board in order to comply with EU-wide rules over the use and storage of human tissue.

The technique would give a baby DNA from a father, a mother and a female egg donor to eradicate mitochondrial disorders that are debilitating and fatal.

Children born after the procedures would possess nuclear DNA inherited from their parents plus a relatively small amount of mitochondrial DNA from the female egg donor.

The donor’s genetic material would be very small – just 37 genes. The majority of our DNA – the 23,000 genes that shape our appearance – is held separately inside the cell nucleus.

Dr Simon Fishel of the Beacon Care Fertility clinic in Dublin – linked to Britain’s largest independent provider of fertility treatment – said it had the capacity to deliver the new technique in Ireland. But he said the clinic would provide the service only if there was public support for the move, and if the Irish Medicines Board authorised it to do so.

‘Good news story’
He said the new technique was a good news story for families and rejected suggestions that children’s DNA would be dramatically altered as a result. “One analogy is that it’s like fixing a car. You recognise the car, it’s got the same brand, heritage and appearance. All you’ve changed is a fuel cell in the engine,” he said.

Dr David Walsh of the Sims Clinic in Dublin said there was likely to be very limited demand for the procedure here given our relatively small population. “This is quite specialised and rare. It’s something that is probably best done in a jurisdiction where there’s a much larger population,” he said.

In the UK, for example, it is estimated that about one in 200 children is born each year with a mitochondrial disorder. Not all suffer serious symptoms and not all the girls among them will pass the condition to their offspring.

The new procedure was pioneered in the UK by researchers at Newcastle University.

Some groups have expressed opposition to the procedure on the basis that it crosses a line in medicine by making genetic modifications to an embryo that will pass down to all future generations.

Dr David King, the director of the London-based Human Genetics Alert, said the techniques were unnecessary and unsafe and could lead society on a “slippery slope” to other forms of genetic modification.