Intruder found asleep in bed with dead rabbit in his pocket 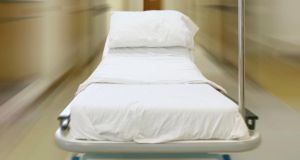 The man lay sleeping unnoticed for about six hours in a maternity ward of the Midlands Regional Hospital in Portlaoise.

A security review has been carried out at the Midlands Regional Hospital in Portlaoise after a man who had been drinking gained unauthorised access to the maternity unit at night and was found asleep in a spare bed.

Following the incident, the man was found to be carrying a dead rabbit covered in blood in his coat pocket.

He was awoken after sleeping unnoticed for about six hours when a nurse doing her rounds discover him snoring in a bed.

Security and gardaí were called to the ward. They escorted him to the hospital’s emergency department where he was found to be suffering from the after-effects of alcohol.

After being checked out, he was removed from the hospital grounds, but less than an hour later was observed climbing back in over a surrounding wall, and when located was causing uproar ina public ward.

At that point the dead rabbit was discovered.

“It seems the guy was out on the town for the night, had a few too many and just wanted somewhere to lie down,” a source said.

It is understood that following the two incidents, a security audit was carried out on the maternity unit and hospital grounds and an investigation put in place to discover how the man had gained entry to the unit and fallen asleep for up to six hours unnoticed.

“Staff at the Midland Regional Hospital at Portlaoise were alerted to an incident in the maternity department in the early hours of Saturday morning, 16 August. The incident involved a member of the public, who gained access to the hospital,” a HSE statement said.

“The hospital has reviewed security measures for the entire hospital campus and is addressing the issues identified.”

G4S, the company providing security to the hospital, was unavailable for comment.