INMO say strikes may be held over hospital overcrowding 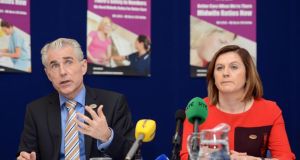 Union leaders have threatened an escalation in industrial action over the coming days and weeks if overcrowding in hospital emergency departments is not drastically reduced.

Speaking outside Beaumont Hospital, where about 150 members of staff of all grades held an hour-long protest at lunchtime, general secretary of the Irish Nurses and Midwives Organisation (INMO) Liam Doran said his group are consulting members over the prospect of further working protests.

“We’re balloting in seven hospitals. And if people vote for it we’ll have a mandate for different phases of action – a withdrawal from administrative, clerical and bureaucratic duties to begin with,” said Mr Doran.

“Ultimately, if the problem isn’t solved we’ll have a mandate to withdraw labour; and we’ll do that,” he added. This was a sentiment echoed by INMO president Claire Mahon who was also present at the protest.

Staff at Beaumont have already voted in favour of a work-to-rule protest, due to be observed on January 27th. And despite 200 less people waiting on trolleys nationwide than at the height of the crisis on Tuesday, Mr Doran believes the situation remains untenable.

“Conditions are horrendous, they’re injurious to patient, and they compromise the ability of staff to provide safe care.

“It’s very regrettable that you have, on a day like this, hard-working staff having to come out and display their frustration in public. But that’s what has to be done for this to be ended,” he said.

Hospitals across the country have been struggling to accommodate emergency apartment admissions over recent days. And according to the INMO there are more than 400 patients being treated on trolley beds.

Moves by the Health Service Executive and the Department of Health to fit more patients into wards already operating at full capacity have drawn scorn from INMO officials and members who say it shows a level of detachment from the magnitude of the problem facing hospital staff.

“I’m disgusted at the Department of Health, the HSE and Minister Varadkar for what they’ve been saying, asking nurses to put their shoulder to the wheel that little bit more,” said Moira Craig, staff nurse at Beaumont .

“We’ve done it for the last few years, and there’s no more in the tank to give – it’s empty,” continued Ms Craig, adding that 37 patients around the hospital are still waiting for beds at the moment.

Today’s protest involved mainly nursing staff. But the stormy weather did not deter a handful of consultants from showing solidarity with their colleagues.

“It is very challenging when you’re working in an environment that’s 200 per cent over capacity to provide optimal care for patients,” said Abel Wakai, consultant in emergency medicine.

“It is very challenging to get doctors to work in emergency departments; and for those who are attracted to emergency medicine it’s very difficult to keep them interested. So they eventually leave after they become aware of the problems we’re talking about today,” he added.

Members of nursing unions are also due to demonstrate outside Leinster House next Wednesday when the Dáil resumes business following the Christmas break.