Hope for child after getting access to ‘miracle drug’ in Dublin 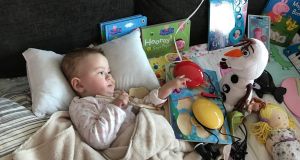 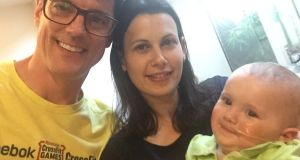 Stephen and Brigetta Lannen with their daughter Nellie Lannen, who has a rare genetic condition, spinal muscular atrophy type one (SMA1).

The father of a young child with a rare genetic condition shed tears of joy after hearing news his daughter will get access to a “miracle drug” that may save her life.

Stephen and Brigetta Lannen, who live in Dublin, had been urgently seeking access to Nusinersen – developed by Biogen, sold under the trade name Spinraza and approved by the US Food and Drug Administration in December – for their daughter Nellie.

Nellie, who is 22 months old, has spinal muscular atrophy type one (SMA1), which causes impaired breathing and wasting of muscle tissue.

Mr Lannen said when Nellie, their only child, was diagnosed at seven months old, they were told children with SMA1 typically die at the age of two.

“They said life expectancy was two years and they would try to manage the symptoms best they can. There was no cure,” he said.

Nellie needed to use a machine for up to 20 hours a day to help her breathe and is fed through a nasogastric tube, as she cannot swallow.

Nellie is one of two children in the State with the severe condition. This drug is the first treatment available for it.

Mr Lannen said the results of clinical trials suggested Nusinersen was a “miracle drug” for children with SMA1. “The ones getting the drug are staying alive and others without it have died,” he said.

The family had feared access to the drug may be delayed due to its high cost.

Mr Lannen said “time was essence” as even a common cold could threaten Nellie’s life.

“If she goes into Temple Street with an infection, we’re 50-50 at best at this stage if she will come out. It’s life or death for Nellie and the other little girl: they don’t have any other hope but this drug.”

A spokeswoman for the National Centre for Pharmacoeconomics (NCPE) had said the company had not been in contact in relation to the drug. “The drug is currently not being considered by the NCPE as it has not yet received a positive opinion or marketing authorisation from the [European Medicines Agency - EMA],” she said.

A Biogen spokeswoman said earlier this month the company was not anticipating approval from the EMA before the middle of this year.

However, the spokeswoman said Temple Street Children’s University Hospital had contacted the company to see if they could be a site for an Expanded Access Programme (EAP) - a programme that provides the drug free of charge. She said the request was being reviewed.

Jumping up and down

“My wife was jumping up and down when she told me Nellie will get access to the drug. I started crying and she said this is not a time for crying , this is a happy time,” he said.

“It’s brilliant. It’s the first time we’ve ever had any hope for her.

“It opens the door and a sliver of hope for her to survive, and get some quality of life. I’m always cautiously hopeful.”

Mr Lannen said the family were meeting Nellie’s consultant paediatric neurologist at Temple Street Children’s University Hospital this Thursday, and hoped the treatment would begin in the next couple of weeks.

“We will take everything one step at a time. I wouldn’t expect her ever to walk but if we could get her sitting up on a wheelchair and smiling, and not needing to use her breathing machine, it would be great,” he said.

Mr Lannen said he wanted to thank everyone for all their support since the couple had spoken out about Nellie’s condition.

“The public support, media and politicians - everyone - have been unbelievable. It’s been very humbling.

“One battle down and another to start now.”