HSE accused of showing ‘lack of empathy’ to children with scoliosis 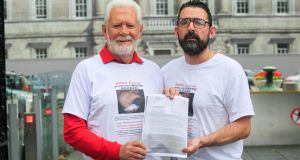 Kevin Daly and Aaron Daly protesting at Leinster House over the time Aaron’s daughter Sophia (12) has had to wait for scoliosis surgery. Photograph: Gareth Chaney/Collins.

The father of a girl with scoliosis who has been waiting for surgery for nearly 17 months has urged the Minister for Health to increase funding and make beds available to children suffering from the disease.

Aaron Daly delivered a letter to the office of the Minister for Health on Tuesday outlining his requests to improve services for children with scoliosis.

Sophia was placed on an “active waiting list” at Our Lady’s Children’s Hospital, Crumlin in April of last year to undergo surgery for a second time.

The Daly family was told in August that Sophia was “not clinically fit for surgery due to her respiratory issues” and her scheduled surgery was cancelled. Mr Daly has expressed fear that his daughter may now never get the surgery.

Minister for Health Simon Harris made a commitment in early 2016 that no child with scoliosis would wait longer than four months for treatment.

In the letter, Mr Daly highlights the “obvious failings in the care provided for the 188 children that are currently waiting on the scoliosis list” and warns that children are developing complications as a “direct consequence” of Government inaction.

International best practice states that surgical intervention is far more successful when carried out within six months, writes Mr Daly, adding that the Department of Health and HSE have shown a “lack of empathy” to children with scoliosis.

He calls for the department to open hospital theatres five days a week until the waiting list backlog is cleared and to make more beds available. Budget restraints on hospital resources should also be lifted until waiting lists are cleared and the treatment abroad scheme should be fully implemented, he writes.

Mr Daly requests that HSE decision makers to visit the families affected by the backlog so they can witnesses the “physical burden of nursing our children”.

Asked to comment on Mr Daly’s requests, a spokeswoman from the department said Mr Harris was aware of Sophia’s case and that Our Lady’s Children’s Hospital in Crumlin was “actively engaged with the family in question on a treatment plan”.

A statement from the Children’s Hospital Group said the recent increased investment in paediatric orthopaedics had “already improved access for surgery” with a “consistent reduction in waiting times”.