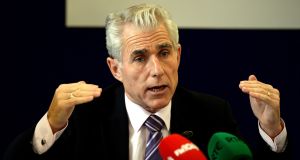 INMO general secretary Liam Doran said the root cause of the trolley crisis was ‘an abject failure of management and politicians’ to plan for and to fund the necessary size of the health service. Photograph: Cyril Byrne

Minister for Health Simon Harris has apologised for the extent of the trolley crisis, although he insists the HSE is now getting on top of the problem.

“It is fair to say the health service wasn’t adequately prepared and that’s not apportioning blame, it’s stating what is now the obvious this week,” Mr Harris said.

He was commenting as latest figures from the Irish Nurses and Midwives Organisation (INMO) show the number of hospital patients on trolleys has fallen sharply - to 395 patients on Friday morning.

This represents a drop of over a third from Tuesday’s record high of 612.

Numbers had fallen to 602 on Wednesday and to 578 on Thursday.

The move follows a series of meetings over the trolley crisis, and new measures including the announcement by the HSE Thursday of the opening of dozens of extra hospital beds.

Patients categorised as being on trolleys are those who have not been allocated a ward bed, and as such are typically kept on corridors or moved between general locations where space allows.

The Executive said on Thursday that 60 additional beds were being opened immediately for the next four weeks in 10 hospitals. These “transitional care beds” are in the following hospitals: Galway, Clonmel, Wexford, St Vincent’s, St James’s, Tallaght, Drogheda, Beaumont, the Mater and Connolly.

They will admit “patients, who would otherwise remain in an acute bed, while their nursing home application is being completed and processed.”

It has also committed to opening an extra 63 beds in hospitals as follows: 28 beds in Galway University Hospital, 15 beds in the Mater, eight beds in Kilkenny and 12 beds in Tullamore.

Mr Harris said the extra beds would be rolled out immediately, with 28 of the 60 beds coming on stream in Galway from Friday.

However, INMO general secretary Liam Doran appeared to have cast doubt on that prospect by saying his organisation had not yet been consulted on the matter.

“They are to supply us with a timeline for when the staff are to be in situ. I asked a straight question: You’ve announced opening beds in Galway, in Kilkenny, in the Mater and so on. How many additional staff will be employed? When will they be employed? That’s the question and we’re awaiting that further data,” he said.

Earlier, Mr Doran said nurses were losing patience with cuts in the health system and the clock was ticking on the prospect of industrial action.

“My members have had enough, we have a 90 per cent mandate. We are starting discussions next week. The clock is ticking.

“You cannot expect people to keep doing this every day and not burn out,” he told the Pat Kenny Show on Newstalk.

“The people paying the greatest price for that are those ageing people who did nothing wrong except they want to grow old gracefully with the support of the citizens of Ireland. They’re the ones languishing on trolleys.”