Have an alcohol problem? Neither does 97% of Irish people 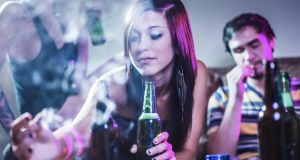 Just 8% of us would like to cut down on the amount of alcohol we drink, according to the Healthy Ireland Survey. Photograph: Getty Images

Just 3 per cent of Irish people regard themselves as heavy drinkers, a new survey shows.

Some 97 per cent of the Irish population regard themselves as teetotal, light or moderate drinkers though almost one in three binge drink regularly, according to a national health survey.

The majority of males in Ireland (55 per cent) and a minority of Irish women (18 per cent) identify themselves as binge drinkers which is classified as drinking six units of alcohol (three pints, six small glasses of wine or six single spirit measures) in one setting.

A substantial number (29 per cent) of those though who consume that amount of alcohol in one sitting do not believe they meet the definition of binge drinkers.

At the other end of the scale a quarter of all Irish adults (75 per cent) do not drink at all.

The second Healthy Ireland Survey based on 7,500 Irish people over the age of 15 surveyed by Ipsos MRBI reveals a population which considers itself broadly in good health, but with strong self-destructive tendencies when it comes to nutrition and lifestyle.

Drinking to excess, smoking, lack of exercise and poor nutrition are commonplace in Irish society. In nearly half the population (46 per cent), Irish people combine at least two of these unhealthy traits. In 2 per cent of cases people admit to all four.

Drinkers living in more affluent areas are more likely to drink at least once a week (52 per cent against 34 per cent), but less likely to binge drink (35 per cent as against 40 per cent).

Just 8 per cent of us would like to cut down on the amount of alcohol we drink.

The number of those who smoke at 23 per cent of the adult population has remained steady from the first survey carried out in 2015 as does the proportion of smokers who want to stop smoking (48 per cent).

Despite the warnings, one-fifth of those under 25 smoke.

Only 27 per cent of people get five portions of fruit or vegetable daily. A similar amount (29 per cent) would like to eat more healthily.

Almost one-quarter (24 per cent) would like to lose weight and 40 per cent would like be more physically active.

Generally, people report themselves to be healthy. Some 84 per cent classify their health as very good or good.

Just 3 per cent perceive their health to be very bad though 28 per cent have a long-standing condition.

The overwhelming majority of people (92 per cent) would like to make changes to improve their health and wellbeing. Being more physically active (40 per cent), more financially secure (31 per cent) and sleeping better (30 per cent) are the most common ways in which Irish people wish to improve their lifestyles.