Gardeners warned of rise in infection risks due to hot weather 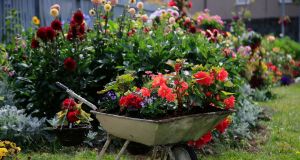 Gardeners have been warned the summer of dry weather and high temperatures may increase the risk of picking up infections from compost.

Compost and other soils contain a large amount of bacteria and bugs, and carry a low risk of infection.

However, the warm weather may lead to favourable conditions for bacteria growth in potted compost, according to Epi-Insight, a monthly report on infectious diseases from the Health Protection Surveillance Centre (HPSC).

A particular type of bacteria known to thrive in compost during warm weather can cause pneumonia.

Gardeners can pick up infections from compost by inhaling contaminated dust or water droplets, or by partial ingestion of soil on their hands.

A type of bacteria, called Legionella longbeachae, is found in potted compost and other garden products in traditionally warm countries. The bacteria is associated with Legionnaires’ disease, a potentially fatal form of pneumonia.

Infections from the disease have been linked with increases in the use of potting compost during warm weather periods in Australia. In Scotland there were six cases of Legionnaires’ disease during a period of exceptionally warm weather between August and September 2013. Six patients contracted the disease through soil or water in their gardens, and required intensive treatment, but all survived.

Due to the summer heatwave in June and July in Ireland, and the continued period of dry, warm weather, the HPSC has advised gardeners to take precautions to avoid picking up infections from compost.

Gardeners should store potting compost in a cool place away from direct sunlight, to prevent bacteria growth, the centre said. They should use a disposable face mask to avoid breathing in bacteria particles in dust, and wear sunglasses or protective eyewear.

Gardeners should always wear gloves, and wash their hands immediately after working with compost mix or potted plants.

When opening bags of compost people should do so at arm’s length, and preferably outdoors, rather than in a shed or greenhouse. When working in a greenhouse the door should be left open, the centre said.

People should avoid drinking, eating, or smoking while working with compost or potting soils, the guidelines said.