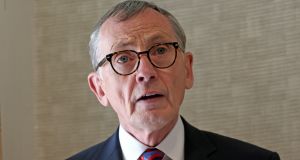 Dr Gabriel Scally, author of the State’s report into the CervicalCheck controversy, says he has not had a conversation with anyone that indicated his services were no longer required. File photograph: Crispin Rodwell

Public health expert Dr Gabriel Scally has said he has not been asked to step aside from his role in the CervicalCheck screening inquiry by Minister for Health Stephen Donnelly.

Dr Scally said he was “surprised” to see a media report on Wednesday that he had been “dumped” from the review adding: “I didn’t feel I had been dumped.” He said he is “not entirely sure” what is going on.

Dr Scally told RTÉ’s Today with Claire Byrne show on Thursday that the report from the Irish Examiner was the first he had heard about it.

“As far as I’m concerned my relationship with regard to CervicalCheck and the aftermath and the recommendations is directly with the Ministers, the responsible Minister, that is the way it has been from the very beginning,” he said.

“I submitted my last progress report on the recommendations in April last year and I said that there was more work that needed to be done. By and large, the progress has been very good, particularly by the HSE, but there were still some areas where progress needed further movement – maybe because there were complex areas – and I’ve been very happy at any time to re-engage with that process of recommendations.”

Dr Scally, the author of the State’s report into the CervicalCheck controversy, said he hadn’t had a conversation with anyone that indicated his services were no longer required.

“I haven’t had that conversation. If that was to come from anyone it would have to come from the Minister [for Health] because that’s the person who really engaged me in the first place,” he said.

Dr Scally’s report reviewed revelations that hundreds of women had not been informed of an audit of their cervical smear tests after being diagnosed with cancer. It was finished in April 2018 and published by the department in December that year.

Dr Scally said there is “more work to be done”, which he is happy to do “if the Minister wants me to”.

“I have had informal discussions with the Minister’s office over the last few months on some aspects of CervicalCheck where they’ve sought my advice and I’ve readily given that. So I don’t feel that there’s any barrier there at all to further work. As most people know, progress from the HSE was very good, progress from the Department of Health not so good, and I have outstanding concerns about the rate of progress,” he added.

Dr Scally said he hadn’t heard from Mr Donnelly regarding the reports and didn’t expect to hear from him “because I think our understanding is quite clear”.

“I’m ready and willing of course to help in any way to implement the improvements that are needed. I think he’s more than willing to have that assistance whenever it is appropriate – whether it’s appropriate to do anything just at the moment in the middle of a pandemic, I’m not so sure,” he said.

The Department of Health said on Wednesday that Dr Scally will provide one final report on reforming the CervicalCheck cancer-screening programme.

“Dr Scally suggested, in his second review report, that he conduct one final progress review at a suitable point sometime after the coronavirus crisis has abated,” it said in a statement.

“Minister Donnelly is supportive of this and will raise it with the CervicalCheck Steering Committee at the appropriate time.”

He told Labour leader Alan Kelly he would have to look into the issue but said “it hasn’t come before Government in terms of any formal decision”.

Separately, Dr Scally said he was concerned women had not gone for CervicalCheck screening appointments due to the Covid-19 pandemic. He said: “We need to build up the trust of women that they can come and have those tests . . . very safely and it will be of great benefit to them.”

He said when things go wrong in health systems, patients want three things: the truth, an apology from someone who has “skin in the game” if something goes wrong and assurance that it won’t happen to anyone else.

Dr Scally said if those three things were done with “grace and compassion, a lot of our problems will go away”.

“Instead of that, we have a system that converts an error into an injustice and then into a court case and then to the High Court and a huge gladiatorial legal system that I know is highly traumatic for the patients, and access to that is very dependent on you having money to get there in the first place,” he said.

“So this is an entirely wrong system and it really needs some serious look at, particularly I think for the public health programmes like screening or immunisation where it’s actually the State is going out and encouraging people to come to us and we will help protect your health. When things go wrong I think we need a better system.”