Ebola virus ruled out as cause of death for Donegal man 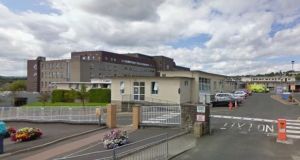 Tests were carried out for the Ebola virus and isolation procedures were put in place after a death in Co Donegal. The man was found dead late last night and taken to Letterkenny General Hospital (pictured). Photograph: Google Street View 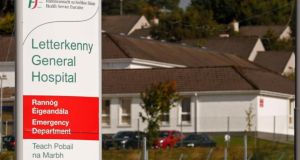 Tests carried out for the Ebola virus on a man who died in Donegal and whose body was placed in isolation in Letterkenny General Hospital have come back negative for the virus. Photograph: Reuters

The Ebola virus has been ruled out as the cause of death in the case of a man who recently returned to Ireland from Sierra Leone.

Tests to see whether the death of Dessie Quinn was due to exposure to the virus returned negative results, the HSE announced this afternoon.

Mr Quinn had been working in the West African country for KN Services, a Dublin-based engineering company. While there he was diagnosed with malaria but is said to have been recovering from the illness.

He lived with his partner in Dublin but was visiting his family in Co Donegal when he was taken ill.

In a statement, the HSE said it “has confirmed that laboratory test samples for an individual, who had recently returned from Africa, had proved negative for Ebola Virus.

“Infection control procedures, which had been put in place as a precautionary measure, will now be stepped down.”

The priest who administered the last rites said Mr Quinn’s family only became aware of the investigation for Ebola through media reports.

“And that was the first that they knew, basically the nation knew before the family knew that this was going to be investigated.”

Afterwards the HSE said it had been in contact with some of Mr Quinn’s family members from the outset.

“The story broke in the media just before 6pm yesterday at which point the HSE had to make a public statement on the matter, given the urgency and nature of a public health issue, such as this,” the statement said.

“Any comment made by the HSE sought to protect the confidentiality of the individual and their family – our statement did not say whether the deceased individual was male or female or what part of Africa they had returned from.”

KN Network Services said it has removed its staff from Sierra Leone as a precaution. It is understood the company had fewer than 10 members of staff in the country, all of whom have been returned to Ireland.

The company also expressed its sympathies to Mr Quinn’s family. In a statement, it said: “Dessie was an extremely hard-working and valued member of staff and was very popular with all his colleagues and he will be missed by everybody who worked with him.”

The Department of Foreign Affairs said there are fewer than 500 registered Irish citizens in the countries affected by Ebola (fewer than 20 in Liberia and Guinea, fewer than 50 in Sierra Leone and about 400 in Nigeria).

A spokesman said the department is advising people to avoid non-essential travel to Sierra Leone, Guinea, Liberia and Nigeria. He added that citizens currently in affected countries should “carefully assess their need to remain in-country at present”.

Ireland has to date provided some €350,000 to support the response to the Ebola outbreak in Sierra Leone and Liberia. The Government and the relevant services are also ensuring preparedness for an event where treatment or medical support may be required in Ireland.