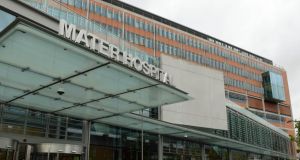 The HSE has ruled out the possibility that a woman living in Dublin who displayed symptoms of Ebola is suffering from the disease.

The woman living in west Dublin had been taken to the National Isolation Unit in Mater Hospital with a suspected case of the Ebola virus earlier today.

A statement from the HSE said: “The patient was considered a low risk for the Ebola Virus but this has now been ruled out.”

It added that all appropriate infection control procedures had been taken by healthcare personnel at the hospital.

The statement said the woman was receiving “appropriate treatment” at the Mater Hospital and that all health protocols had been put in place.

“There are no known cases of Ebola in Ireland presently,” it said. “The overall risk of a case of Ebola being brought into in Ireland is low.”

“ If a case is confirmed in Ireland, the primary concerns will be treatment of the patient and containing the situation.”

Earlier gardaí provided an escort for the ambulance carrying the woman to the Mater. This led to temporary road closures on Eccles St and Berkeley Rd.

Tests were carried out for the Ebola virus in Co Donegal in August after a man who had been working in Sierra Leone was found dead.

Dessie Quinn had been working in the West African country for KN Services, a Dublin-based engineering company. While there he was diagnosed with malaria but is said to have been recovering from the illness.

Mr Quinn had been back in Ireland for two weeks on holiday from Sierra Leone when his body was discovered.

Following tests, the HSE confirmed that laboratory samples had proved negative for the Ebola virus.

The Department of Foreign Affairs has said there are fewer than 500 registered Irish citizens in the countries affected by Ebola (fewer than 20 in Liberia and Guinea, fewer than 50 in Sierra Leone and about 400 in Nigeria).

Earlier today the World Health Organisation (WHO) declared Nigeria Ebola free after a 42 day period with no new cases elapsed.

Meanwhile Belgium, which is one of the few countries accepting direct flights from West Africa, has announced it will introduce screening on passengers travelling from Ebola-affected areas from today.

Belgium’s decision to introduce screenings makes it the third EU country to implement the precaution, following the introduction of passenger screenings in Britain and France in the past week.

Britain now has passenger screenings at its airports and Eurostar terminals, while France’s Charles de Gaulle airport followed suit over the weekend.

Last week Minister for Health Leo Varadkar called for Ireland to step up its preparedness for tackling Ebola in response to the threat it poses.

On airport screening, it remains the view in Ireland, based on best advice, that it is far more effective to support screening in West Africa on outward travellers than to introduce screening on inward passengers in Europe.