Dentists to withdraw from medical card scheme due to cost of PPE, association says 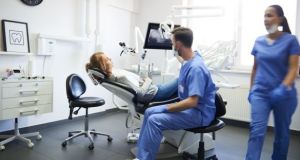 Some dental practices have introduced a fee for PPE for patients or have increased the costs of treatments. File photograph: Getty

Many dental practices are expected to withdraw from the dental medical card scheme due to the additional cost of Personal Protective Equipment (PPE) putting the viability of the practices at risk, the Irish Dental Association (IDA) has claimed.

Since May 18th, dentists have been permitted to reopen for routine appointments, but additional medical-grade PPE must be worn to prevent the spread of coronavirus, particularly for treatments that require aerosol generation.

Fintan Hourihan, chief executive of the IDA, said Minister for Health Simon Harris promised the provision of adequate PPE to dentists six weeks ago, adding that it was “gravely disappointing that we have seen nothing since”.

In a letter to the IDA on June 4th, Mr Harris said “subject to necessary approvals, they [the HSE]will be in a position to commence issuing PPE to dental practices in the next seven days”

Mr Hourihan said the delay in delivering the equipment is a “dereliction of duty from the Government”.

“Despite the fact that over 700 dentists have registered their need for such equipment, none has been provided which will have huge consequences for Irish people,” he added.

Mr Hourihan said the additional cost of this equipment has resulted in many businesses examining their viability, while others are examining their participation with the Dental Treatment Services Scheme (DTSS), which provides access to limited dental treatment for adult medical card holders.

“Dentists have been left out in the cold by a Government which has merely paid lip service to the provision of PPE and has not engaged regarding emergency adjustments to the medical card scheme or regarding support for dental practices in general, the vast majority of which have suffered significant shortfalls since the emergence of Covid-19.”

He added that the situation threatens the DTSS, which would affect around 1.5 million Irish people.

“Our members will endeavour to ensure the safe delivery of dental care to medical card patients, but they cannot do so in a manner which imperils the viability of their practices and livelihoods,” Mr Hourihan said.

“We believe the Department’s actions could cause many thousands of patients being directed to seek dental care directly from the HSE dental services.”

Meanwhile, some dental practices have introduced a fee for PPE for patients or have increased the costs of treatments, to compensate for the additional spending, sourced within the dental industry have said.

Smiles Dental, which operates a number of clinics around the country, has introduced a “safety-tariff”, which is € 6 for non-aerosol procedures and € 18 for aerosol-generating procedures.

The tariff applies to each individual appointment, but does not apply to patients who hold a medical card or who are visiting on the PRSI scheme.

“This is a temporary measure – we are committed to keeping costs to a minimum and hope to reduce this further as the cost for PPE reduces, or the need for enhanced safety measures decreases or are no longer needed,” the company says on its website.

A spokeswoman for the HSE said the procurement office had provided PPE to a small number of dentists since late March.

“Since early May, the volume of requests has increased and a profiling of demand has been considered by the HSE,” the spokeswoman said. “The HSE is currently liaising with the Department on the issue of PPE for dentists.”

The spokeswoman added that the guidance issued to dentists on reopening “supports the use of the normal PPE used in dentistry”.