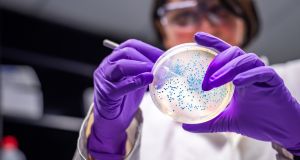 CPE is spread person-to-person or through contact with contaminated surfaces.

August was the worst month yet for detections of an antibiotic-resistant superbug said to pose an “existential threat” to the health service.

Monitoring saw 97 new patients diagnosed with Carbapenemase-Producing Enterobacterales (CPE), regarded as the most dangerous superbug because it is resistant to almost all antibiotics.

The Health Service Executive (HSE) says this is the highest number of newly detected sample received in its laboratories in one month. The trend will place further pressure on hospitals already battling coronavirus cases and virus restrictions that have impacted on the delivery of normal care.

CPE is spread person-to-person or through contact with contaminated surfaces. About one in 20 patients who come in contact with carriers will themselves be colonised by CPE and one in 400 runs the risk of a serious, invasive infection.

So far this year, 434 patients have been diagnosed with CPE, compared to 452 in the corresponding period in 2019. Detections nosedived during the lockdown but are now back at record levels.

The number of tests being carried out for the bug is also back at pre-pandemic levels, according to an update from the HSE’s Health Protection Surveillance Centre (HPSC).

With more than 1,000 people then carrying CPE, he warned a continued increase in cases would move hospitals to a “tipping point beyond which effective control is impossible”.

The bug was “an associate factor” in the deaths of eight patients in University Hospital Limerick, according to a report published last year.

Up to the end of last year, the data indicated that measures to control the spread of CPE have been “generally effective”, according to the HPSC, with the number of detections plateauing.

It says there is increasing recognition that the bug spreads not only person to person but as a result of “environmental reservoirs” of organisms in hospitals.

“Moist areas, for example showers, sinks and toilets are the most common locations from which CPE have been detected.”