Another postponement as four more Cardinals test positive for Covid-19 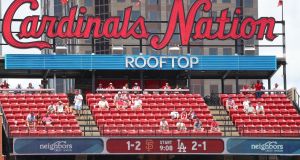 Fans watch a game between the St Louis Cardinals and the Pittsburgh Pirates from a rooftop restaurant across the street from Busch Stadium the stadium last weekend. Photograph: Getty Images

Four more members of the St Louis Cardinals tested positive for Covid-19, forcing the postponement of Saturday’s scheduled game in Milwaukee against the Brewers, according to multiple reports Saturday morning.

It wasn’t known if the four people were players or other members of the traveling party. The Cardinals confirmed Friday that two players tested positive before the team left Minnesota, where they concluded a series on Wednesday.

The spread of Covid-19 to the Cardinals forced Major League Baseball to reschedule Friday night’s game, the Brewers’ home opener at Miller Park, to part of a doubleheader on Sunday. Neither MLB nor the teams confirmed Saturday’s postponement and the fate of the Sunday doubleheader remains uncertain.

The report of the latest positive test results is another punch for a season already teetering on the brink of cancellation. The Miami Marlins, with 18 players diagnosed with Covid-19, haven’t played since last Monday, forcing MLB to reshuffle the its abbreviated 60-game schedule and either sideline the Marlins’ opponents or find new places for them to play.

Commissioner Rob Manfred said the season could be in jeopardy if teams and players don’t do a better job managing the Covid-19 outbreaks, ESPN reported on Friday.

Manfred, who has the power to shut down the season, reportedly made this comment to MLB Players Association executive director Tony Clark. The shutdown could happen as soon as Monday, per the report.

Some players have not been abiding by the league’s protocols, with broadcasts also showing some players not wearing masks, high-fiving and spitting.

“There are some bad decisions being made,” a source told ESPN’s Jeff Passan of players’ off-field activities.