‘Before Leo Varadkar announced the tighter restrictions, the beach was busier than in summer’ 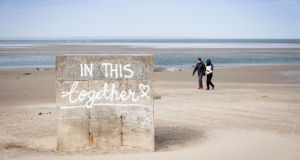 On a bright Sunday afternoon on a near-empty beach in Sutton, north Dublin, Marie Clarke and her sister-in-law Lorraine Clarke say they feel as though they’re living in a “twilight zone” as they take their daily walk.

“It feels so strange . . . on a sunny spring day, in normal times, this beach would be packed,” Marie said.

Lorraine has observed that “there is social distancing, and people are afraid to be close to one another, especially the older people”. Despite this, Marie feels people are “more friendly” now.

“I’ve walked along here several times before and people wouldn’t bat an eyelid or say hello. But now people are smiling, saying: ‘Hello, lovely day, isn’t it?’ – it’s definitely loneliness. People are stuck inside all the time. Now, people want to say hello and just make some type of connection with human beings,” she said.

Emmet McCabe, who lives less than a kilometre away from the beach, which lies near Howth village, agrees that people are “getting the message now about social distancing” to tackle the coronavirus pandemic.

“I’m glad the beach is quite empty today. Before Leo [Varadkar] made the announcement about the tighter restrictions, I came down here and the beach was busier than it would be in the summer with people trying to find things to do. But it seems to be getting through to people now,” he said.

“I’ve seen a maximum of 20 people here along the whole beach and everyone is sticking to the groups they live with and giving others space. It took some time initially but now people are just getting on with it.”

He feels “lucky” to have a garden and to live near the beach. “I don’t know what it’d be like for people living in apartments or in town. I’m definitely running a lot more now than I was before because it is getting mundane, working from home as well. I play hurling a lot so it’s good to have a bit of competition between the lads, to beat each other’s times,” he said.

Niamh Kenny and her son Liam, who walk on the beach almost every day with their dog Alfie, have noticed more families visiting the beach with their kids as of late, but “people are being really good and keeping far apart.

“I think we’re even imagining 2m to be more than what it actually is . . . Everyone is going on the side of caution,” Ms Kenny said.

A local woman (84), who did not wish to be identified as she was “well above cocooning age”, sat on the beach alone.

“I’m well accustomed to being alone. I live alone and most of my children live abroad. But I’m very fit for my age – I played tennis into my 50s. I just have to get out for my daily walk to be able to cope,” she said.

The pattern was similar around the country, as gardaí reported high levels of compliance with the coronavirus guidelines.

High visibility patrols were mounted at several popular outdoor locations to remind people of the social distancing protocols. One of the Garda helicopters was deployed over Dublin, including over the Phoenix Park, for much of the weekend, to watch for large congregations of people.

In the Wicklow mountains, several hillwalkers exercising more than 2km from their homes were told to return home.

Deputy Commissioner John Twomey said: “We want to thank people for the high level of compliance with the health guidelines. It is vital that continues . . . for the rest of the time they are due to be in place. By working together and keeping to the HSE advice [on coronavirus], we can flatten the curve and save lives.”

This week Minister for Health Simon Harris is expected to sign new regulations granting additional powers to gardaí to enforce restrictions on movement. Those breaching the restrictions could face a fine of up to €2,500 and up to six months in prison.

1 With Lincoln looking on, the crowd dropped to their knees as 7pm approached
2 Luke ‘Ming’ Flanagan bares his bottom half to European Parliament
3 Coronavirus: 25% of new cases arising in the community with no known link to other cases
4 Easing restrictions: What exactly will happen next Monday?
5 Are we there yet? The seven sticking points in Government formation talks
Real news has value SUBSCRIBE