Coronavirus: No new deaths and 6 more cases confirmed in Republic 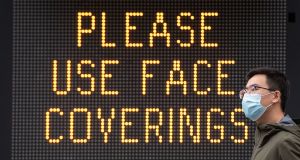 A man wearing a protective face mask walking past signage advising the use of face coverings. Photograph: Dominic Lipinski/PA Wire

The Department of Health has reported no new Covid-19 deaths and just six new confirmed cases of the coronavirus disease.

This is the lowest daily total of new confirmed cases reported by the department since March 9th and the third time that no new deaths from the disease have been reported on a daily basis since May 25th.

The first case of the disease was confirmed on February 29th and the first death on March 11th.

The HSE said that it was working to identify any contacts that the six newly infected cases may have had to provide them with information and advice to prevent further spread of the disease.

There was just one new admission of a person with Covid-19 to hospital in the last 24 hours. The median age of Covid-19 cases is 48.

Data from the State’s Health Protection Surveillance Centre shows that the number of clusters of cases in private houses has risen to 323 from 241 – an increase of 34 per cent in a week. A cluster is defined as two cases or more.

Private houses now account for the highest number of outbreaks of Covid-19, surpassing nursing homes over the past week.

Houses in the east and northeast of the country account for the largest increase in the number of outbreaks, rising from five and 76 respectively on June 11th to 33 and 118 on June 18th.

Meanwhile, the Government has said it will ask the National Public Health Emergency Team to consider changing guidelines to permit more than 50 people to attend religious services from the end of the month.

This follows criticism from the Catholic Archbishop of Dublin Diarmuid Martin who described the limit of 50 people attending churches from June 29th as “strange” and “disturbing”.

A spokesman for the Government said that it would ask State health officials managing the response to the Covid-19 pandemic “to give further consideration” to the maximum number.

Church buildings and religious places of worship are among the places that are allowed to reopen in the third phase of relaxation measures being introduced at the end of the month but the guidelines limit indoor gatherings to 50 people from June 29th before rising to 100 on July 20th.

On Saturday Dr Martin expressed disappointment at the blanket restriction on attendance to 50 people. He said that churches could accommodate more people while managing to maintain social distancing between church-goers.

The Government expressed support for the cleric’s view on Sunday saying that “many more” people could be accommodated in churches and the amount of time people spent in churches was limited, reducing the risk of infections spreading.

“The virus is known to spread when people are at close quarters in an enclosed space for a prolonged period of time,” said the spokesman for the Government.

“Large churches, however, can accommodate many more than 50 or 100 people even with strict social distancing. Services last less than 90 minutes.”

The archbishop said that it “seems strange that in a church with a capacity of 1,500 people which has been scrupulously fitted out for conformity with social distancing and with clear indications about movement and interaction of people within church, that only 50 people might be present, while we all see a situation in which large retail outlets brimming with people.”

Dr Martin said that hoped it would be possible to come to “a more reasonable and responsible situation in which numbers permitted to attend Mass could be proportionate to the size of each church.”

The total number of deaths, according to the DoH, remains at 545. A total of 4,870 people in Northern Ireland have tested positive for the virus.

On Saturday, the North reported no new positive cases for the first time since the outbreak began.

Northern Ireland releases two sets of data on coronavirus fatalities. The DoH figures include all deaths recorded by Health and Social Care (HSC) Trusts where there has been a positive test for coronavirus. These are mainly hospital deaths.

Northern Ireland Statistics and Research Agency (NISRA) figures, based on death registration, are released weekly. These cover deaths in all settings and include all fatalities which mention coronavirus on the death certificate, whether or not there was a positive test for Covid-19.

The most recent available data from NISRA, which covers the period until June 12th, puts the total number of deaths involving Covid-19 at 802, 48.5 per cent higher than the figure of 540 reported by the DoH in the same period.