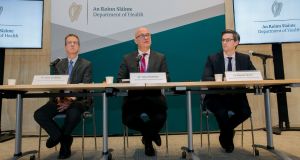 Two males and two females in the west of the country tested positive for the virus on Wednesday evening, bringing to six the number of confirmed cases of the virus in the Republic.

Northern Ireland also reported two new cases on Wednesday, one of them a Queen’s University Belfast student, bringing its total to three.

The group of four new cases reported by the National Public Health Emergency Team (NPHET) is understood to involve members of the same family recently returned from northern Italy. They are being cared for in a hospital in the west.

The process of tracing people who came into contact with them has already begun, but is likely to be more complex than it was with the individual cases previously reported.

All of the cases reported in the Republic are in travellers returning from Italy.

Separately, Mr Reid has warned the country is facing a potentially unprecedented health situation arising from the Covid-19 outbreak.

In a bulletin on Wednesday evening, he said the health service, although still in a containment phase, was planning for all eventualities.

“From what we are learning, however, as we see how the virus spreads in countries across Europe and in the UK, we are facing a potentially unprecedented situation in this country and across all of our health services.

“So we must continue to be vigilant and practise good infection prevention and control measures, to protect ourselves, our patients and our colleagues.”

Neither of the two new cases in the North involved travel through the Republic.

The North’s minister for health Robin Swann said the two cases were not connected.

“One individual travelled from northern Italy. The other had recent contact with a person elsewhere in the UK who had subsequently tested positive for Covid-19,” he said.

Northern Ireland’s chief medical officer, Dr Michael McBride, said there were “no implications” for the Republic.

In the North, Antrim Area Hospital has set up a drive-through testing service for the virus.

With new cases outside China now far outnumbering those in that country, the number of cases in Italy passed the 3,000 mark, with 107 deaths. Schools and universities have been ordered to close and Serie A teams will play games in empty stadiums to try to slow the spread of the disease.

In Ireland, no public events are facing restrictions arising from the coronavirus outbreak, Dr Tony Holohan, chief medical officer with the Department of Health, said.

Guidelines on the holding of mass gatherings are currently being finalised with a view to restricting the spread of the virus. The outbreak has already forced the postponement of the Ireland-Italy rugby match due to take place this weekend.

However, Dr Holohan said “at the moment, there are no implications for any event, large or small, in this country”.

“As things stand, on the basis of our assessment, we see no implication for the St Patrick’s Day parade, and we don’t see that changing,” he said at the daily briefing from NPHET on Wednesday.

He warned against “unilateral actions” by “well-intentioned” people in communities that run the risk of creating confusion or reinforcing stereotypes.

While not referring to specific incidents – a Co Meath school closed on Wednesday due to fears over the virus – Dr Holohan said it was important that whatever happened in local communities was “informed by clear advice”.

He said he understood why people might be concerned but there was information and guidance available on what to do from the HSE which could assuage concerns.

Again defending NPHET’s stance on not naming the school where the first confirmed case is a student, he said the confidentiality of people had to be protected and there was no public interest in “going further”.

The HSE warned sick people not to attend religious services and said churches should plan for the possible suspension of activities if clergy fall ill with coronavirus.

The shaking of hands at services should be suspended, holy water fonts should not be used and priests have been advised to “nod” or “smile” instead of exchanging the sign of peace, it has advised.

The UK on Wednesday saw its biggest day-on-day increase in coronavirus cases, with 85 people now confirmed to have the virus. Three of the 29 new cases in England were passed on in the UK, raising fears that community transmission may be taking hold.