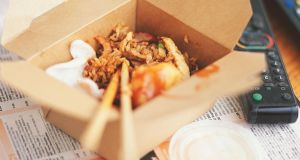 Salt warnings should be compulsory for Chinese takeaways and ready meals, health campaigners have said.

The worst-offending Chinese takeaway dishes in a survey published on Tuesday by Action on Salt were found to contain as much salt as five McDonald’s Big Macs, while many had more than half an adult’s entire daily allowance.

There have been growing calls from health experts for tough new salt targets – making front-of-pack labelling mandatory and following New York’s lead by requiring chains to put warning labels on high-salt dishes. They are also urging the food industry and restaurants to reduce salt by reformulating takeaways and ready meals.

In February, new voluntary codes of practice restricting the advertising and marketing in Ireland of high fat, sugar, salt (HFSS) foods, such as snack foods, fizzy drinks and confectionary was announced.

Of 141 supermarket Chinese ready meals analysed, nearly half (43%) were high in salt – containing more than 1.5g/100g, or 1.8g per portion – which would trigger a red “traffic light” label.

The recommended upper limit of adult salt intake is 6g a day – around one teaspoon. The study found that average salt intake across the study was 10.7g a day. The average intake for the UK was 8.5g, USA was 9.6kg, Japan was 11.7g and China was 13.4g.

According to the Food Safety Authority of Ireland, the average daily salt intake in Ireland is approximately 10g in adults.

“Salt is the forgotten killer as it puts up our blood pressure, leading to tens of thousands of unnecessary strokes, heart failure and heart attacks every year,” said Graham MacGregor, the chairman of Action on Salt and a professor of cardiovascular medicine at Queen Mary University of London. “Reducing salt is the most cost-effective measure to reduce the number of people dying or suffering from strokes or heart disease.”

Accompanying rice dishes, spring rolls and prawn crackers – and soy sauce – can pile on the salt in a Chinese meal. Iceland’s takeaway egg fried rice has a “shocking” 4.1g salt per 350g pack – more than in 11 bags of ready salted crisps.

Dishes from six Chinese restaurants were also analysed, with 97% found to contain 2g of salt or more. More than half (58%) contained in excess of 3g of salt per dish – half an adult’s maximum recommended daily intake.

Recent State-funded research estimates that 85,000 of today’s children on the island of Ireland will die prematurely due to overweight and obesity – more than twice the entire Irish death toll in the first World War.